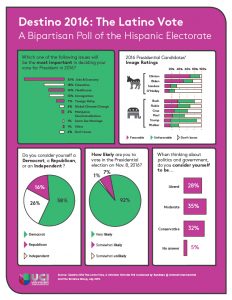 The number of registered Hispanic voters in this country is projected to hit 16.7 million by 2016. With a 1 in 6 ratio in key swing states, it’s clear that the path to victory in the 2016 Presidential election cycle must include a smart strategy for winning the Latino vote. The Hispanic electorate doesn’t just have potential; it’s wielded its power for several cycles now, helping to swing seven states between 2004 and 2012. Candidates who have won the Latino vote in past elections already know that the key to their success was to engage Latino voters early and often. Just ask Governors Chris Christie of New Jersey or Terry McAuliffe of Virginia.

As we move into this already contentious (and crowded!) election cycle, Univision Communications Inc. is dedicated to tracking the public opinions of the Hispanic electorate. This July, Univision News issued a bipartisan, bilingual poll conducted in partnership with Bendixen @ Amandi International and The Tarrance Group.  The first of its kind in this political season, this poll zeroes in on four key findings:

With six months until Super Tuesday and 15 months until the general election, the findings of this poll reveal that candidates must engage Hispanic voters starting now in order to win key states.

For more on the Hispanic vote, visit our dedicated site and follow @hispanic411.