Demagoguery, pandering, even populism aren’t leadership. Here’s what is: Especially striking in our new ranking of the World’s 50 Greatest ­Leaders is how many of them you may not recognize. In our media-saturated, personality-obsessed global culture, how can that be? Yet it is so, and that’s what makes this group so heartening. It turns out the world is full of people you’ve never heard of who are rallying followers to make life better in ways you never imagined. The professor who led the group that uncovered the Flint, Mich., water crisis; the New Delhi government official risking his career to fight pollution; the Italian mayor welcoming Middle East migrants to his tiny town—improving its economy and brightening their prospects. Who knew?

Plenty of other great leaders cited here are rightly famous, and we’ve recognized some in previous editions of the list. This year there are even a few three-peats, including Amazon CEO Jeff Bezos—our new No. 1— Apple chief Tim Cook, and Pope Francis. Anyone who has been ranked previously must re-qualify each year with new achievements. As always, we cast a wide net, seeking outstanding leaders in all sectors of society around the world. It isn’t enough to be accomplished, brilliant, or admirable. We recognize those who are inspiring others to act, to follow them on a worthy quest, and who have shown staying power. No mere flashes in the pan, and thus none of the U.S. presidential aspirants, make our list. And no, we didn’t select Donald Trump, the phenomenon of the moment; many candidates over the decades have ignited flames that flared brightly and then went out if the candidate lost the nomination or the election; others have proved to be little more than demagogues. Simply applying for the world’s top leadership job, as Trump and his rivals are doing now, does not in itself make one a great leader. Nor, as you’ll see, does having that job necessarily put you on our list.

The leaders you’ll meet here, known and new, will lift your mood and upgrade your assessment of the world’s future. Some may inspire you to join their followers. And those unheard-ofs, so seemingly ordinary, may even prompt you to rethink your own potential as an inspiring leader. 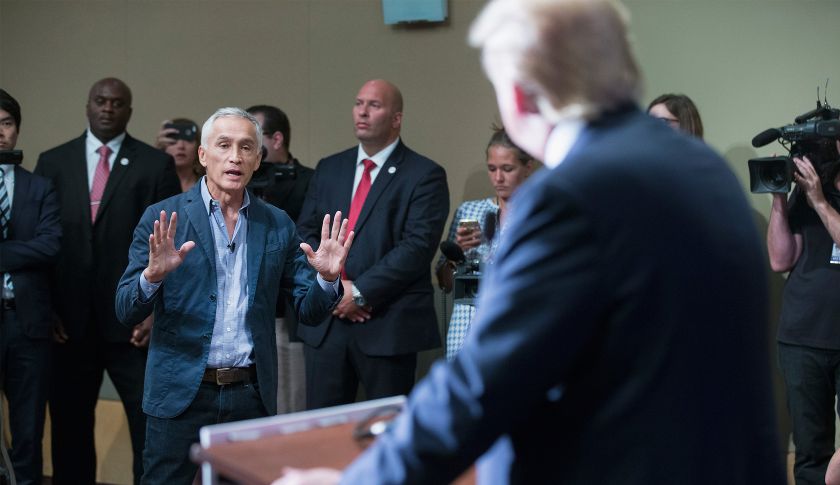 DUBUQUE, IOWA – AUGUST 25: Republican presidential candidate Donald Trump fields a question from Univision and Fusion anchor Jorge Ramos during a press conference held before his campaign event at the Grand River Center on August 25, 2015 in Dubuque, Iowa. Earlier in the press conference Trump had Ramos removed from the room when he failed to yield when Trump wanted to take a question from a different reporter. Trump leads most polls in the race for the Republican presidential nomination. (Photo by Scott Olson/Getty Images)

For much of white America, Ramos became a household name only after Donald Trump kicked him out of a press conference in August. But Ramos, who has co-hosted Univision’s flagship Spanish-language news show for almost 30 years, might be the most influential journalist in the U.S.  Ramos is part journalist, part advocate, a newsman who hammers candidates on immigration policy even as he urges Hispanic Americans to register to vote. Political analysts have found that Latinos are twice as likely to vote if they frequently watch Spanish-language news, a correlation they dubbed the “Jorge Ramos effect.”

Video: How Jorge Ramos Is Getting People to Vote