Two months out from the presentations, it’s shaping up as a good year 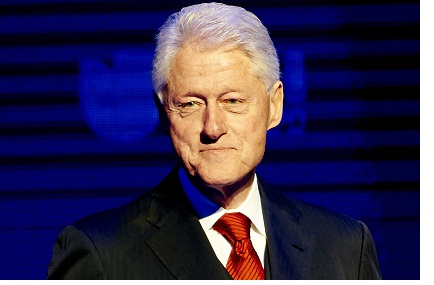 Former President Bill Clinton at the Univision Upfronts on Tuesday, May 12, 2015, in New York. (Phillip Angert/Univision via AP)

There are still more than two months before most of the Hispanic broadcast networks will make their presentations to advertisers, but these days deals get made fast.

Though the Hispanic upfront usually wraps up after the English-language broadcast networks are done, the Spanish-language upfront often breaks first.

Univision has signed deals worth millions days before its upfront presentation in recent years.

That’s why many networks are already putting the finishing touches on their pre-upfront presentations that will be shown to a handful of buyers and advertisers over the coming weeks.

Of course, the earlier buyers know the networks’ general plans for the coming season, the sooner they can make decisions about where to commit their clients’ money.

And with advertising becoming so competitive between Spanish- and English-language broadcast, with more fluidity between them than there’s ever been in the past, the networks are doing whatever they can to stand out during the upfront season.

Last year, for instance, Univision brought out Bill Clinton for its upfront, a stunt that generated tons of buzz.

Over the coming weeks, Media Life’s series “The Spanish-language upfront” will take an in-depth look at this year’s Hispanic TV upfront.

We’ll talk to networks about their plans for the coming year and cast a critical eye on their programming strategies, including an analysis of how they’re doing in the ratings and which key demos they are and aren’t connecting with.

We’ll also forecast the upfront based on conversations with media buyers and planners. The early word: It should be strong.

Advertisers are eager to reach Hispanic Millennials, and many of them still watch Spanish-language TV, especially the soccer games that can be harder to find online.

Spanish-language networks, like English-language ones, are increasingly offering crossplatform packages to reach a wider group of viewers.

And many advertisers are simply more interested in connecting with Hispanics than in the past, now that they represent over 17 percent of the U.S. population.

This article is part of an ongoing Media Life series entitled “Catching the next big wave: Hispanic media.” You can read previous stories by clicking here.