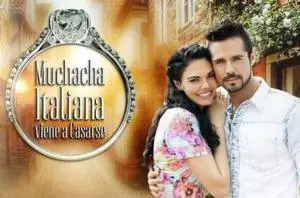 Univision Network’s latest telenovela “Muchacha Italiana Viene a Casarse” (Italian Girl Comes to Wed) takes viewers to Italy in one of this year’s most romantic love stories about a beautiful and heroic Italian girl who accepts a marriage proposal far from her native land in order to save her dying sister, knowing that this decision will change her life forever.

The story unfolds in a little town in Italy where Fiorella, played by Livia Brito, briefly meets the love of her life Pedro Angeles (Jose Ron) for the first time. But tragedy unfolds as Fiorella loses her father (Ricardo Blume) and becomes her sister’s caretaker. Upon his death, an old friend of his in Mexico, an important restaurateur named Vitorrio Dragone (Enrique Rocha), asks Fiorella for her hand in marriage and promises to take on expenses for her sister’s medical care. As he is considerably older than his young bride, Vittorio sends her a photo of him as a young man. Out of necessity and encouraged by the prospect of marrying a good man, Fiorella accepts.

The drama continues as the two sisters travel to Mexico and after many failed attempts, they get lost and do not get to meet Vittorio. After unfortunate events, they finally arrive at the ranch of the prominent Angeles family where Fiorella meets again the man of her dreams Pedro Angeles, who also falls in love with her. This is also where she meets his ambitious family who is embroiled in maintaining their wealth, built on crime and mystery.

Although there are vast differences in social classes between them, the two lovers are determined to fight any obstacles in their way. However, Vittorio, who never ceased his search for the beautiful Fiorella, is still determined to marry her. Tune in to see the story of these two young lovers who will stop at nothing to find their happily ever after.