Adweek: Meet the Man Reinventing Late Night: A Public-Access Star Who'd Rather Fail Than Bore You

Meet the Man Reinventing Late Night: A Public-Access Star Who’d Rather Fail Than Bore You

Fusion’s Chris Gethard is a host for the social age 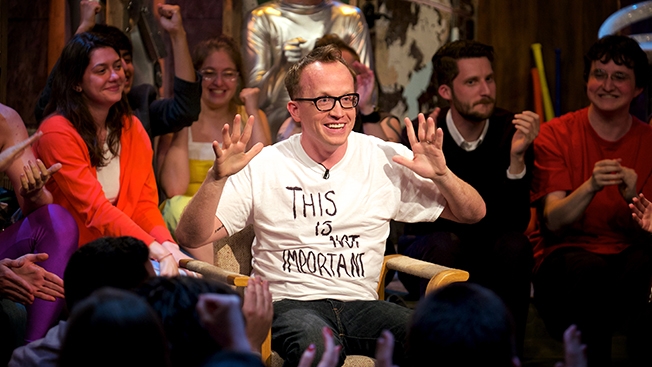 Gethard wants his show to be the place where celebrities wear T-shirts and jeans, like he does. Watch The Chris Gethard Show promo here

Behind a DIY, delightfully haphazard set, you can find pieces of late-night history—carefully wrapped in plastic—that were unsanctimoniously chucked outside of the Ed Sullivan Theater.

They’re part of David Letterman’s set, and Chris Gethard, a comedian whose interactive public-access show just made its move to cable’s Fusion network, has them. Letterman was arguably the last host to truly transform the late-night format. That Gethard, whose brand of avant-garde comedy could inspire a new wave of change within the evening talk show world, snapped them up makes sense. He just can’t display them. Yet.

The Chris Gethard Show premiered on Fusion last Thursday, with guests Ilana Glazer and Abbi Jacobson of Comedy Central’s Broad City. Gethard kicked off the show with a distinctly self-aware opening monologue, a battle cry of sorts that told viewers the alternative comedian is more than aware that his show isn’t for everyone.

“This is a show for outsiders, people who maybe feel a little outside the mainstream,” said Gethard, still reeling from an interview with Good Morning America in which he’d been running on a treadmill in Times Square while promoting the show.  “I think it’s smart to call that out and let everyone know that I know.”

The show was recorded two days before it aired on Fusion, but the taping was livestreamed, giving viewers who caught the stream a look at the behind-the-scenes process of the show, seeing everything—the triumphs and hiccups—just like the audience sitting cross-legged on the stage floor. (The episode that aired won’t appear online until June 4.) It’s no surprise that Gethard would opt for a warts-and-all livestream, since over-sharing is an ethos that has remained part of the show’s DNA since its inception four years ago on New York City public access.

“While The Chris Gethard Show is a late-night show, it is unlike any other on television both in terms of the host and the format,” said David Ford, vice president of marketing and communications for Fusion. “One of the incredible things about what Chris has been able to do over the years is create a meaningful community around his show—the level of interactivity between him and the audience is like no other show on TV right now. We kept that in mind as we thought about how to market and promote the show.”

Using traditional local and national television spots, as well as digital advertising, Fusion is looking to raise overall awareness about the show. But it is focusing its efforts on ways it can increase the base of the show’s community. “So much of our energy is going into promotion on social media platforms including Facebook, Twitter and Tumblr as well as some programmatic video,” said Ford.

“My brand has weirdly, in a certain sense, been defined by failure,” said Gethard. “I said something on the early run of the [public access] show where I was like, ‘You can’t be scared of failing in this life. We’re all losers. That’s why we’re here on public access. But you know what? We lose well.’ That wasn’t intended to be a catchphase but it took off. It’s like, wow my brand is [defined by] failing. Facinating.”

With a 10-episode order from Fusion, all airing this summer, Gethard is focused on creating what he calls “real human interactions” with the show’s audience. For example, the show’s first episode was centered around weird body parts, with callers showing their oddities and Gethard and crew championing those differences.

“The first call on our show was a girl who called up and took out her two front teeth,” said Gethard. “That’s an actual human interaction where you called up and showed us something that was vulnerable about yourself and then our celebrity guests told you that you were cute and then you start blushing. That’s something that I think loops back around and becomes very honest.”

That sense of honesty is key to Gethard. But it also works as a promotional tool, said Alex Fumero, director of programming and development at Fusion. “The show is so interactive and so unique that it becomes its own promotional machine,” said Fumero. “Not because it’s self-promotion but because it’s doing new stuff that’s really noteworthy. This is cutting-edge comedy, alt-comedy on the frontier. It’s born of the traditions of Andy Kaufman and David Letterman in the early days. That is naturally going to be noteworthy.”

And it’s that connection to Letterman that Gethard was trying to underline when he instructed his crew, just a few weeks ago, to go grab pieces of the Late Show set when word quickly spread that CBS workers were dumping it on the street. Lawyers are trying to determine when Fusion will ever be able to air another network’s intellectual property. But even if they stay covered up, the abandoned set pieces serve their purpose: Gethard is the guy who fails, but not for lack of trying.