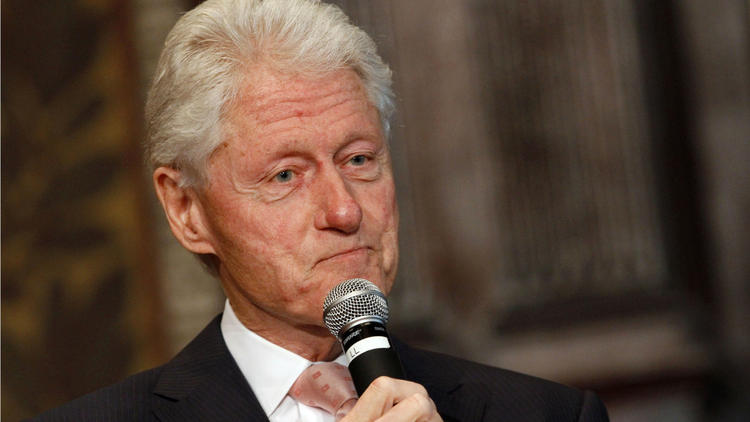 Former President Clinton kicked off Univision’s upfront presentation Tuesday with a 15-minute question-and-answer session with Alicia Menendez, a host on Fusion, the cable network jointly owned by Univision and ABC.

With a little help from former President Clinton, Univision executives made their case Tuesday for why advertisers should be spending more on the Spanish-language TV network.

Clinton helped fill the house at the Lyric Theater in Manhattan’s Times Square as he kicked off an upfront presentation with a 15-minute question-and-answer session led by Alicia Menendez, a host on Fusion, the cable network jointly owned by Univision and ABC.

Clinton, who was paid by Univision for his appearance, said younger Latinos are headed to faster income growth as more are completing their education. He noted that while Latino household income reached an all-time high during his presidency in the 1990s, growth was slowed by the number of younger people who dropped out of school to work and support their families.

“Now, with more prosperity and higher level of education, you’re going to see this wage gap close and the income will go up in a hurry and that will change what people will do with their money,” said Clinton, in a remark that played right into Univision’s message to the ad community.

In advance of Clinton’s appearance, Univision issued a release that cited a study from IHS Economics that said Latinos will account for 40% of U.S. employment growth in the next five years and more than 75% between 2020 and 2034.

“If I were an advertiser, I’d be studying the changing demographics very carefully,” Clinton said.

Univision executives followed Bill Clinton by stressing the network’s audience of Spanish-speaking viewers is not fragmenting at nearly the rate that English-language networks are seeing. Time-shifted viewing on DVRs now accounts for 54% of the time spent watching major broadcast networks ABC, CBS, NBC and Fox. Univision, the No. 5 network, said 91% of its audience of 18-to-49-year-olds is watching live, which means the vast majority is not fast-forwarding through commercials.

Steve Mandala, Univision’s executive vice president for advertising sales, said that statistic has value for movie studio and retail advertisers with time-sensitive commercial messages. Overall, Univision has become more competitive with the other broadcast networks in the ratings, winning 31 nights among the 18-to-34 age group this last TV season, up from 17 night the previous year.

You can access the LA Times article in its entirety here.