It has taken a long time, but the growing chatter about disruption in the TV industry, for 10 years a staple topic in the blogosphere, has finally become more of an action item throughout the business. Declining TV viewing, a sluggish advertising market and the launch of a number of new alternative distribution services, such as HBO Now, have exposed cracks in traditional business models.

Where all of this is headed remains a hotly debated issue. But few would doubt that these developments have led to technology shifts. The leadership behind those moves—demonstrated by B&C’s annual Technology Leadership Awards—is more important than ever.

In fact, the 2015 award-winners, who will be honored April 13 during the NAB Show in Las Vegas, represent several areas that are central to the future of innovation in the industry. Two pacesetters have earned kudos for their work on industry-wide standards, which are increasingly crucial in helping companies rapidly deploy new technologies and take advantage of changing consumer tastes. Several others have deep backgrounds in digital media, where they have shown there can be a big payoff for networks and stations that embrace newer media or have been savvy innovators in applying technologies to the news business. A few even display an old-fashioned love of learning and tinkering, an impulse that was evident both in the early days of broadcast TV as well as in more recent advances in computers and software.

One thing these leading executives have in common—their curiosity and passion for technology bodes well for the future of TV. 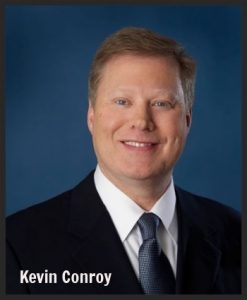 Kevin Conroy joins the 2015 class of Technology Leadership Award winners with a career of innovation that stretches back to the music industry in the mid-1990s, through groundbreaking work at AOL, and more recently his time at Univision, where he spearheaded an aggressive and successful charge into digital media.

“I think I’ve always been drawn to disruption,” says Conroy, who started his career in home video in the early 1990s at a time when there were major concerns about how the medium might upend the Hollywood studios. He then moved into the music business at BMG Entertainment, where his team was among the first to use CD-ROMs and the Internet to promote artists. In 2001, he joined AOL, where he won kudos for revamping their products for iOS platforms and his teams built AOL Music and the award-winning AOL Radio for iPhone.

In 2009, he joined the Hispanic programmer, Univision, seeing an opportunity to work in a company that focused on one of the most tech savvy groups in America. “It is clearly the fastest-growing audience in the U.S. and one that over-indexes on all things mobile relative to the general market,” Conroy says.

“As early as 2009, before it became a popular phrase, we started focus on mobile-first,” as Univision planned new digital products, he adds. Thanks to that focus, about 70% of Univision’s digital audiences are now accessing content exclusively on a mobile device.

The company also became an early advocate of over-the-top services, TV Everywhere offerings and video streaming with the launch of its digital video network UVideos and the digital audio product Uforia.
That has laid the foundation for some of the impressive digital growth in the TV industry, with Univision’s digital platforms averaging 25 million video views per month across online, mobile and apps in the fourth quarter of 2014. In February 2015, Univision Digital had 7.6 million uniques.

In 2014, those successes led to his expanded current role, where he is working to use big data and personalization to further improve their digital offerings. “In the last 15 years, the industry has tackled the technology problems of delivering high quality video at scale,” he says. “Now the big question is how we can deliver more personalized experiences and get closer to the consumer.”