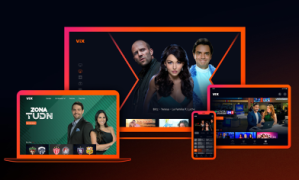 MIAMI, FL – MARCH 31, 2022 – TelevisaUnivision Inc., the world’s leading Spanish-language media and content company, today announced that ViX, the streaming service with the world’s largest offering of Spanish-language entertainment, news and sports content, is now available to all users in the U.S., Mexico and most of Spanish-speaking Latin America. The free AVOD tier is accessible across all major mobile platforms, connected TV devices and via web on vix.com. ViX is a two-tier service in one single app, comprised of the free AVOD product launched today and an SVOD option, ViX+, coming in the second half of 2022 with 10,000 additional hours on its first year.

“Today marks a new dawn in Spanish-language streaming with the launch of ViX, adding another giant step in the transformation of the new TelevisaUnivision: Hundreds of millions of Spanish-speakers in the U.S. and most countries in Latin America will have a dedicated streaming platform that’s made for Spanish speakers  and made by Spanish speakers,” says Pierluigi Gazzolo, President and Chief Transformation Officer of TelevisaUnivision. “We are so proud to be able to offer this amazing content with a broadcast-like experience across all genres, in the form of linear channels as well as on-demand. All advertising supported, and importantly… for free.”

“The ad-supported tier of ViX is the ideal way for viewers to first experience our brand, our content and our vision. This incredible collection of live news, sports, and entertainment programming for the whole family, offered in an AVOD free service, will make it the indispensable streaming product for Spanish speakers in the U.S. and Latin America,” said Rafael Urbina, EVP and GM of ViX. “Our linear programming includes exclusive channels dedicated to original content created for ViX. Importantly, most of our content was produced in Spanish, not just translated into it, and more than 50% of the ViX offering is exclusive to our service. Also, we couldn’t be more excited about ViX being the digital destination of the FIFA World Cup Qatar 2022 in Mexico, starting on April 1st with the draw.”

With more than 40,000 hours of content in the AVOD tier, ViX users will be able to stream original programming and top live sports and news, free of charge, in the first broadcast-quality ad-supported offering for the Spanish-speaking world. Additionally, the AVOD tier curates a massive offering of multi-genre entertainment content allowing users to easily discover and rediscover their favorites within the familiar interface of an electronic programming guide (EPG).

From Televisa’s mega-hits and classic novelas to iconic content from some of the world’s best producers, including scripted and unscripted series; blockbuster movies; children’s programming; live newscasts from multiple worldwide sources; and a broad live soccer offering. ViX offers content for the whole family.

Novelas: From classics like “Marimar” and “Rebelde” to mega-hits such as “Teresa” and “Amores Verdaderos,” with superstars such as Thalía, Angelique Boyer, Sebastián Rulli, Gabriel Soto and many more, ViX has it all.

Movies: Top-performing movies from leading Hollywood studios, such as Lionsgate, MGM and Disney, indie movies and Latin American films, all available in Spanish.

Children’s Programming: A collection of children’s channels, including “Moonbug Kids” featuring megahits “Cocomelon” and “Blippi,” as well as a dedicated channel “ViX Junior” featuring pre-school hits such as “Strawberry Shortcake,” “Sunny Bunnies” and “Franklin” and a “Pinkfong Baby Shark” channel for parents to play and sing-along with their kids.

“Janiot PM”. Premiering on Sunday, April 3 at 8 p.m. ET and hosted by renowned international news anchor Patricia Janiot, this program will take viewers beyond the headlines with high-profile interviews, context and analysis of the main issues affecting the U.S. and Latin America.

“Línea de Fuego” (Firing Line Squad). Host Luis Carlos Vélez and a panel of Univision Noticias contributors, along with invited guests from both sides of the political spectrum analyze and debate the day’s hottest headlines. The new program streams daily, Monday through Friday at 10 p.m. ET, with a focus on the latest and most pressing issues of the day, including national and international politics, climate change, healthcare, social justice, financial education, and gender equality.

“Sin Rollo Extra”. Univision personalities and special guests discuss the hottest and most trending topics in a round table format. The host Carlos Calderón, together with five panelists, dive into the most controversial news of the day, sharing their own uncensored opinions in a fun, conversational way. Throughout the entire hour, panelists discuss the headlines, images and statements that everyone is talking about. The show, which is an extension of “Despierta América’s” popular segment with the same name, streams live Monday through Friday at 12 p.m. ET.

N+ Media. N+ features Mexico’s first news streaming channel, N+ Media, with exclusive 24/7 programming that includes breaking news, documentaries, investigative journalism, analysis, technology, opinion, and pop culture, as well as the best young and up-and-coming talent in journalism and anchors with great experience and recognition. N+ Media will be available in the U.S, Mexico and the rest of Spanish-speaking Latin America where ViX is available.

International News Channels. A collection of live news channels from Latin America and Europe, including “ATV+” from Peru, “TN23” from Guatemala and “Euro News,” the number one international news channel in Europe, will also be available at launch.

“TUDN News”. The hub for all things sports news, analysts, developments and insights; the first-of-its-kind show on a Spanish-language streaming service, hosted daily by Valeria Marin and Memo Shutz Monday through Friday at 10 p.m. ET.

“TUDN Picks”.  Hosted by Alfredo Tame and featuring a select group of betting experts or tipsters, the first ever live-sports betting show in Spanish airs Monday through Friday at 7 p.m. ET.

ViX features live games of some of the top leagues and tournaments in the world. The extensive soccer offering available on ViX (AVOD tier) includes:

“Uforia con Bad Bunny: El Evento Que Revolucionó La Música En El 2020” (Uforia with Bad Bunny: The Event that Revolutionized the Music in 2020). Premiering on March 31, this special takes viewers behind the scenes of Uforia’s live music event with Bad Bunny that took place in NYC on September 20, 2020. At the height of the pandemic, this epic journey brought one of the biggest artists on the planet to a stage like no other, overcoming many challenges to bring a live concert to the homes of music fans in NYC and around the globe. This special tells the story of how Uforia pulled off the biggest secret show of all time and gave over 10 million fans an unforgettable live stream experience that resonated worldwide. With the help of the City of New York, NYPD, Harlem Hospital and the ingenuity of countless creative individuals, Uforia conceptualized and built a moving stage atop a customized truck that traveled through the streets of the Bronx and Spanish Harlem delivering a live music spectacle unlike anything ever attempted before. Now, for the first time, ViX reveals all the incredible effort it took to bring this event to life.

“Detrás de Cámaras” (Behind the Scenes). This show takes viewers behind-the-scenes of TelevisaUnivision’s most successful reality shows. The first edition of “Detrás de Cámaras” features a firsthand look at the intimate moments the audience doesn’t get to see during the production of “Tu Cara Me Suena”. From backstage footage, participant interviews, confessionals, exclusive recordings and other never-before seen moments from the show, “Detrás de Cámaras” is hosted by Rafael Araneda and streams after each episode of “Tu Cara Me Suena,” Sundays at 10 p.m. ET.

“Lo Más ViXto”. Hosted by “Despierta América’s¨ own Jomari Goyso and the winner of “Nuestra Belleza Latina” 2021 Sirey Morán, this magazine-style show is the definitive source for what to watch on ViX. During each episode, users will learn more about new programs and content offerings coming to ViX and previews of the top series, movies, novelas and specials on the service.