“Our first quarter of 2022 clearly demonstrated the great potential of our now combined company. We continue to move forward as the fastest growing media and entertainment company. We’re seeing fantastic results across the board, including ad sales and distribution revenue growing double digits, which makes us very optimistic about the rest of the year” said Wade Davis, CEO of TelevisaUnivision. “On March 31, 2022, we unveiled our streaming service, ViX, introducing our AVOD tier to tremendous excitement, and this is just the beginning. Our growth-oriented strategy is supported by ratings increasing 23% in the Univision network, the highest among all major U.S. networks. In Mexico, we further distanced ourselves from the competition with 60% market share of weekday broadcast. I am ecstatic to build upon this momentum with a world-class team that is already working as one.”

Discussion of Financial and Operational Results

The “Pro Forma” numbers are adjusted to include the Televisa content business for all of Q1 2021 and the entire first quarter of 2022 for equivalent comparative purposes.

The Company has decided that for comparable purposes, all explanations will be made on a pro forma basis. 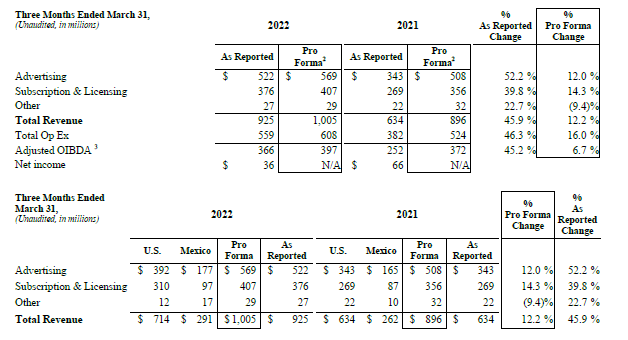 Unless stated otherwise all comparisons are on a pro forma, year over year basis. Ratings and Audience

On January 31, 2022, Grupo Televisa, S.A.B (“Televisa”; NYSE:TV; BMV:TLEVISA CPO) and Univision Holdings II, Inc. (“UH Holdco”) (together with its wholly owned subsidiary, Univision Communications Inc., “Univision”) announced the completion of the transaction between Televisa’s media content and production assets and Univision. The new company, which is named TelevisaUnivision, Inc. (the “Company” or “TelevisaUnivision”), creates the world’s leading Spanish-language media and content company. TelevisaUnivision will produce and deliver premium content for its own platforms and for others, while also providing innovative solutions for advertisers and distributors globally.

The transaction brings together the most compelling content and intellectual property with the most comprehensive media platforms in the two largest Spanish speaking markets in the world. Televisa’s four broadcast channels, 27 pay-TV channels, Videocine movie studio, Blim TV subscription video-on-demand service, and the Televisa trademark, was combined with Univision’s assets in the U.S., which include the Univision and UniMás broadcast networks, nine Spanish- language cable networks, 59 television stations and 57 radio stations in major U.S. Hispanic markets, and the ViX AVOD platform. Together, TelevisaUnivision owns the largest library of Spanish-language content and intellectual property in the world, and the most prolific long-form Spanish-language content engine in the industry. As a result of the combination, TelevisaUnivision reaches over 60% of the respective TV audiences in both the U.S. and Mexico. Across television, digital, streaming, and audio, the Company reaches over 100 million Spanish speakers every day, holding leading positions in both markets.

On March 12, 2021, Univision Holdings, Inc (“UHI”) entered into a reorganization agreement, which closed on May 18, 2021, pursuant to which, among other things, UH Holdco (formally known as Searchlight III, UTD, L.P. “Searchlight”) became the 100% owner of the issued and outstanding capital stock of UHI through a series of transactions (the “Reorganization”). Prior to the Reorganization, UH Holdco held a non-controlling interest in UHI. Upon consummation of the Reorganization, the existing Searchlight entity was converted into a Delaware corporation and re-named Univision Holdings II, Inc. As a result of the Reorganization, a new basis of accounting was established at May 18, 2021 (the “Reorganization Date”), which resulted in the remeasurement of the Company’s assets obtained and liabilities assumed to fair value as of such date. The periods prior to the reorganization date are identified as “Predecessor” and the period after the reorganization date is identified as “Successor”. 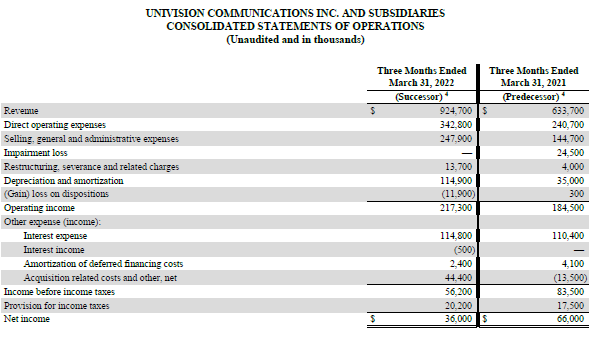 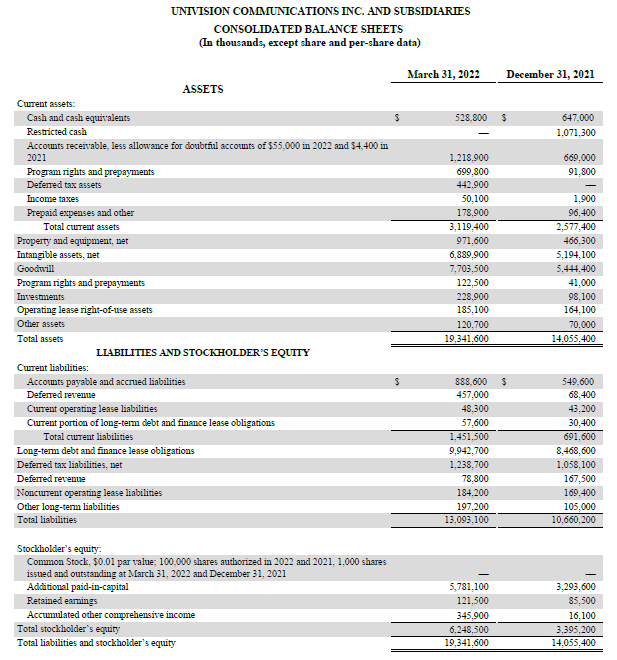 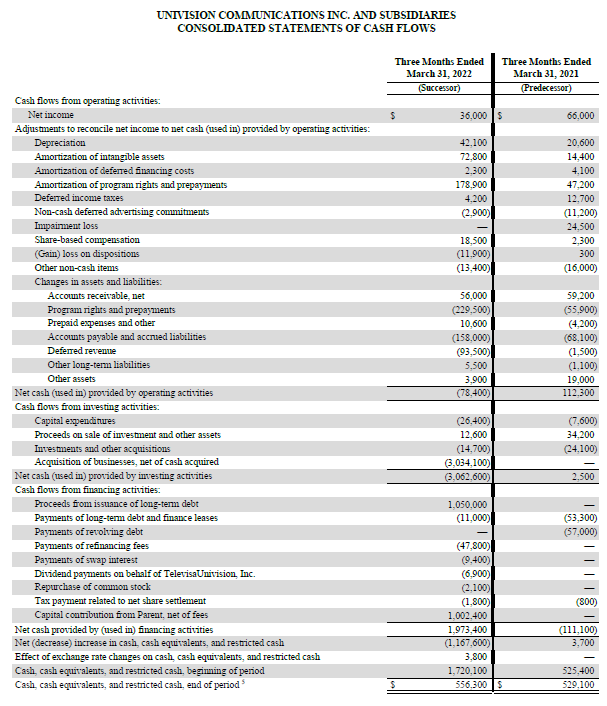 The tables below set forth a reconciliation of the non-GAAP terms Adjusted OIBDA, Adjusted Core OIBDA and Bank Credit Adjusted OIBDA to net income. 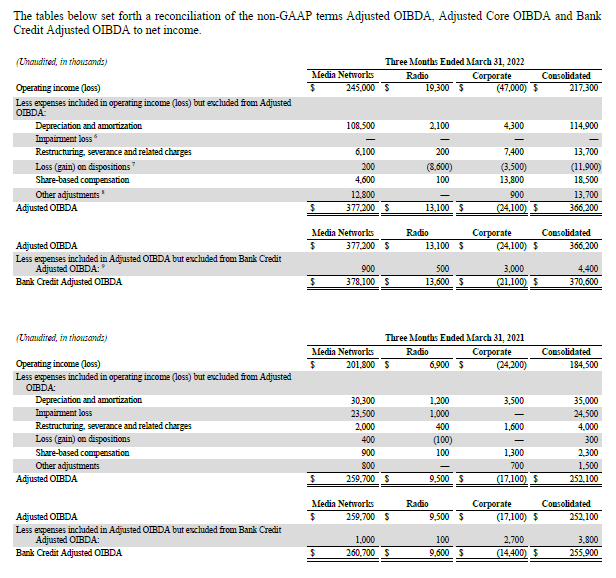 1 Unless stated otherwise, all ratings information in the U.S. is presented for Adults 18-49 in Spanish-language primetime, and in Mexico is People 4+, 28 cities Nielsen IBOPE.

3 See page 9 for a description of the non-GAAP term Adjusted OIBDA, a reconciliation to net income and limitations on its use.

6 Impairment loss in 2021 is related to the write down of FCC licenses, program rights and charges to certain lease assets.

8 Other adjustments in 2022 and 2021 to operating income are primarily comprised of unusual and infrequent items as permitted by our credit agreement, including certain purchase price adjustment and operating expenses in connection with COVID-19.