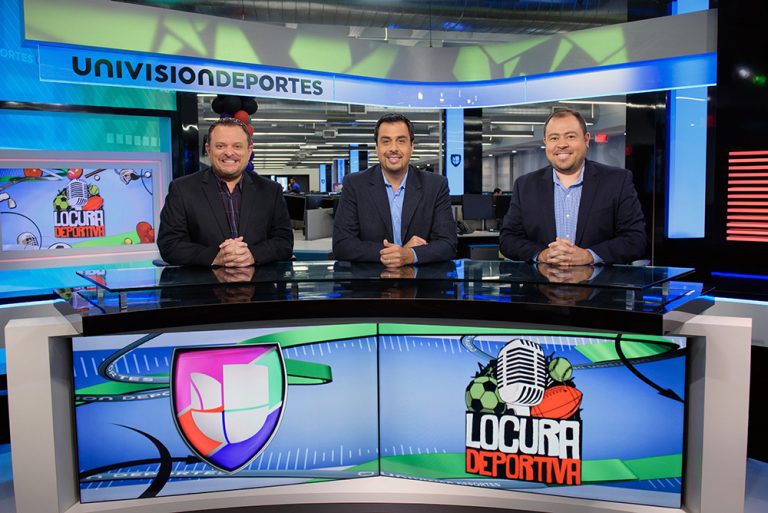 Approaching its fifth anniversary, the sports network is a technology trailblazer

The launch of 24-hour cable sports network Univision Deportes five years ago signaled Univision’s focus on live sports programming. As the network approaches its anniversary next month, Univision’s sports operation has never been stronger, providing more than 80 live game productions per month and, from its Miami facility, an average of six hours of studio programming a day.

SVG sat down with Olek Loewenstein, SVP of strategy and operations, sports, to discuss how the Facebook Live efforts will impact production; the evolution of Univision’s at-home production model for MLS matches; plans for 4K, HDR, and VR; new tech toys to be used for this summer’s CONCACAF Gold Cup coverage; Univision Deportes’ progress; and how the new Miami production facility has enhanced its sports content.

How does the simulcast of MLS and Liga MX matches on Facebook Live impact Univision’s production?
It does affect us to a certain extent. Anytime we have a parallel production on one of our properties, we try not to let it affect us. That way you don’t change the production workflow to tailor it to a specific delivery method. But you have to change a little bit of the workflow. The goal is to [operate out of] a single control room. The moment I need to go to a separate control room, the costs just get out of hand.

In the case of Facebook, we are delivering it straight to an encoder that goes to their backend, and they publish it. It doesn’t affect us much in terms of production crew, equipment, and infrastructure. Facebook wants [the stream] to be produced in the highest possible quality. Given that we are already producing [the game] for HD TV or large digital displays, Facebook is more than happy with the quality of our output.

Obviously, in the case of Liga MX, we’re [streaming to Facebook Live] in English. So the announcers are different, and the graphics are different. For the announcers, it [requires] just a different audio path. For the graphics, we have a split: every time you click a button on the switcher to present a graphic that is done in Spanish, it replicates the same thing on the English-language feed with translation. The only element that we are duplicating is an audio operator for the English announcers.

How do you see the production of live-streaming experiences evolving in the coming years?
I think we’re all learning what people want to see in terms of experience and what they value. If you put an extra camera on LeBron James or on Messi, is that something that people want for a mobile experience? Or [do they want] stats overlays? I don’t think anybody knows yet what that mobile experience needs to make it more appealing than [watching] on the TV screen. I think, at this stage, people watch [sports] on Facebook Live because they either can’t watch it on a TV or can now leave their house and have easy access to see it in good quality. I think that may change in the future, but that’s the case for now.

We have not [had many requests] for smaller production units or flypacks that would allow us to create multiple outputs from the same production for [streaming and mobile], but we are [producing content specifically] for mobile. In our app, for example, we have game clips that are not available anywhere else.

One of the things we have discussed is having another producer [onsite] to create content for different platforms: highlights, clips, etc. I don’t think there is a need for that [onsite] quite yet. In the case of MLS, we fiber back all the cameras [to our Miami facility], so anything you can do [onsite] you can actually do there.

You have now been producing MLS games using an at-home model from Univision control rooms in Miami. How has this workflow evolved, and do you believe it has been a success?
With the MLS, we took a plunge and went all-in. We are bringing everything back via fiber — the announcers, cameras, audio, etc. — over multiple paths using The Switch. We basically have only talent, engineers, and camera [operators] onsite.

If you ask, on a scale of 1-10, how good it is for the industry? I think it’s 20. It allows production houses, networks, etc., to take the money that they’re saving on the production side and reinvest it in content. The saving is not so much on the money side; it’s on the crew side: the same crew in a control room [in Miami] can do two or three games the same day. If I have them traveling on Thursday to do a Friday game and coming back on Saturday, I’ve lost them for three days, and they can produce only one game. In addition, I have people that are doing soccer multiple times, and they are better trained.

I think the quality of the product doesn’t change, but costs are reduced. So it’s a win-win. I think it’s going to evolve with IP. With IP, you can put five cameras into an Ethernet cable, and you’re using 100 Mbps [to transport] the entire show. IP cameras will become the norm. As networks and production houses replace their current cameras, they’re going to start buying IP-enabled cameras. With IP, you can even do the shading remotely.

Can you provide a sneak preview of your production plans for CONCACAF Gold Cup this summer?
For us, this is no different than what we did for Copa America or the previous Gold Cup in the sense that we’ll try to be live as much as we can. We will be live about 4 p.m.-2 a.m. ET every day from every single location. We definitely are going to try to do new things from a technology standpoint, but we haven’t determined exactly what that’s going to be.

Now the question is, what’s next? We’ve been working with Brainstorm on virtual teleportation, where we virtually bring someone from a remote location for an interview in our studio. Now we want to do the reverse and send somebody from the studio to the pitch, which is more complicated. We’re going to use it a lot for Gold Cup. Hopefully, we will figure out a way [to] work with CONCACAF to create a room where we can bring a player, do interviews.

Univision was the first in the U.S. to produce a soccer match live in 4K with the Copa America Final last year. Do you have plans to produce more?
Not at this time. When we produced the first 4K soccer game in the U.S., it showed our willingness to explore. During that time, DirecTV was pushing a lot of broadcasters to produce in 4K since they were [launching] their 4K channels. Some of the MVPDs were pushing this, but there have been a lot of issues and not a lot of [consumer] interest.

The cost is another issue: it doesn’t cost two times more; it costs probably four times more. So, for now, I don’t think there is a point in doing it. That said, I think [the 4K transition] will happen naturally because the new cameras are all 4K-enabled and, with [software licensing], you can call Sony and buy the 4K license for one game.

What about HDR? Any plans to explore live programming in HDR?
I think, with all these technologies, there is a huge push from the industry to adopt these new technologies because it means economical gains on all fronts. It means [broadcasters] have to change their infrastructure, [consumers] have to change [their] TV, and it creates a forced-replacement cycle. After a year or two, you can look back and say, Now I know where this is going. I think it’s not like with 3D, which disappeared. I don’t think you can buy a TV today that’s not 4K. It’s a natural progression and will happen with the infrastructure. It will happen on everything and the same with wide color gamut and HDR.

Any plans to produce live VR content?
As a fan, I struggle to see how VR provides a better experience in soccer, which is our [primary] content. Even though the conceptual idea of VR for a sport is awesome, it’s realizable only as long as you can place the camera in the middle of the field. And that’s not possible for soccer. The technology is still so intrusive. I also feel that nobody is going to be willing to watch 90 minutes of VR. And I feel that the quality of the resolution is not high enough; It’s definitely not HD.

I think it’s the very early stage. For sports, we’re still trying to find out what works and what doesn’t. But I do think it’s fascinating. The company that cracks the ability to create an immersive experience through hardware — be it glasses with earphones or something else — is going to [create] the next big thing. Who doesn’t want to get transported somewhere and be able to truly experience Súper Clásico without actually being there? I don’t believe creating a virtual suite where you can just choose multiple angles is the answer. That’s a misconception of VR to me; it’s just a multicam experience.

On the Univision side, we bought a Nokia OZO cam, and we’re starting to create a production workflow for VR. We’re not going to do VR live yet. But I think VR provides a tool to create experiences for people to access places that they previously haven’t been able to access: putting a camera in the locker room or in the middle of the tunnel as the players talk to each other just before they go out [on the field]. It’s postproduced, short form, on-demand, free content. I think that’s what is going to work, but we need the leagues to agree to that.

Approaching the five-year anniversary, how has the network evolved from a production and programming perspective?
I couldn’t have foreseen a better outcome if I had dreamed it up in 2012. Had you asked me, when we switched everything and went on-air, where I would see, in my wildest dreams, the network five years down the road, I couldn’t have foreseen how well we are doing. We’ve been one of the fastest-growing cable networks ever since launch. From a programming and live-show standpoint we’ve evolved a lot. And, every year, we expand on that. That is very satisfying. I think the quality of what we’ve done has improved. We’ve moved from an aging building to a state-of-the-art facility where the layout was designed specifically by us and for us in sports.

How has the new production facility improved your operation?
In the old building, we started with about 40 people. Now we have, depending on how you count them, about 200. A large percentage of those hired in the last five years are under 40, so we have a very young group of people committed to the network. The last three years, we have won Emmys for our productions, and I think we are even stronger this year because what we did at Copa America was astonishing.

On the technology side, we started [out] barely taking the games as they were coming produced and putting them on-air, and now we’re producing most of the big events ourselves. We’re even producing some of the Liga MX matches ourselves. We started with no [mobile production facilities], and now we have multiple flyaways and equipment spread out in the U.S. and Mexico that we’re using on a weekly basis.