On the heels of a very competitive CONCACAF Gold Cup tournament that culminated with Mexico’s seventh title, my team at Univision Deportes Network (UDN) scored its most important goal yet with a new monthly rating record.  In July, the network delivered more Total Viewers 2+, Adults 18-34, and Adults 18-49 than any other cable sports network in America besides ESPN.  Anyone would agree that’s a major victory for a three-year-old cable network.  This year’s Gold Cup delivered nearly 4x the live streams than the same tournament just two years ago. It was also the number-1 most social sporting event on broadcast primetime in July. But that’s not even the headline of this story: For the month of July, UDN was the #1 sports network in the country for a sports marketer’s most coveted demo – men 18-34, tied with ESPN. 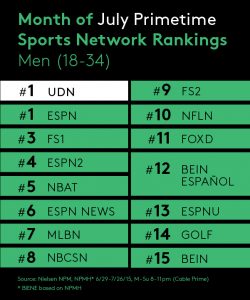 The highly anticipated October 10th playoff match between the U.S. Men’s National Team and the Mexican National Team airing on our platforms, the recent launch of our new UD Fantasy game, and more soccer rights than any other broadcaster in the U.S. speaks to our commitment to be the home of sports for Hispanic America.