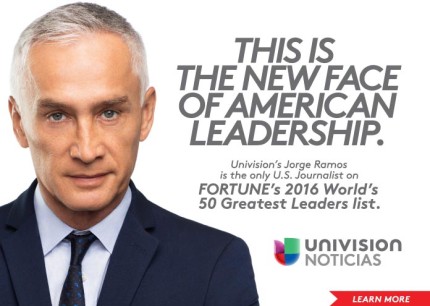 Jorge Ramos was recently named one of Fortune’s “World’s 50 Greatest Leaders,” alongside Jeff Bezos, Pope Francis, Melinda Gates and more. I can’t tell you how proud I am to work with and know Jorge. I also can’t tell you how much I agree with Fortune when it says he just might be “the most influential journalist in the U.S.”

Real influence is not achieved overnight. In fact, it’s earned from consistency of message – and actions that back those messages up. This is Jorge in a nutshell.

For more than 30 years, he’s had a singular, pro-Hispanic vision in his reporting. Across our nightly newscast Noticiero Univision, Sunday public affairs show Al Punto, Fusion’s weekly news magazine show America with Jorge Ramos and more, Jorge covers the issues that matter most to our community and is unwavering in his desire for progress and solutions that achieve access for all.

This is why his audience is large and loyal. Both Noticiero Univision and Al Punto are the most watched newscasts among Hispanics and reach a larger unduplicated audience (90%+), versus their English-language broadcast competitors. He also attracts significantly more bilingual Hispanics to his shows compared to their English-language broadcast counterparts. These Hispanics could watch the news in English, but they choose to tune in to Jorge again and again.

The “Jorge Ramos effect,” a phrase coined by an assistant professor at Cornell to describe his ability to mobilize mass numbers of Latinos, is a real thing. We are capitalizing on that “effect” this election season in order to get as many Latinos registered and out to the polls as possible. Participating in the electoral process is a big part of achieving the American Dream.

Jorge and his Univision News colleagues are the primary reason we are the most trusted brand for Hispanic America, as measured by Burke. Our viewers are three times more likely to say that Univision is a “source I trust” and a “channel I am proud to watch” than the viewers of the English-language “Big Four.”

I’ve often said the single biggest asset Univision owns is the relationship, affinity and trust that we have with our community. Protecting – and even growing – that trust is a priority for me. This is how we will remain a leading American entertainment and news company, and it’s how we can continue to offer our industry partners a platform for mobilization, too.

Source: Nielsen, NPM & NPM-H (09/21/2015-02/28/2016) Live+7. Based on a 6+ minutes qualifier for unduplicated audience and language spoken by the person for Bilingual (defined as Mostly Spanish, Mostly English and Spanish/English Equally).