Teresa Rodriguez will present the initiative that celebrates Hispanic excellence. 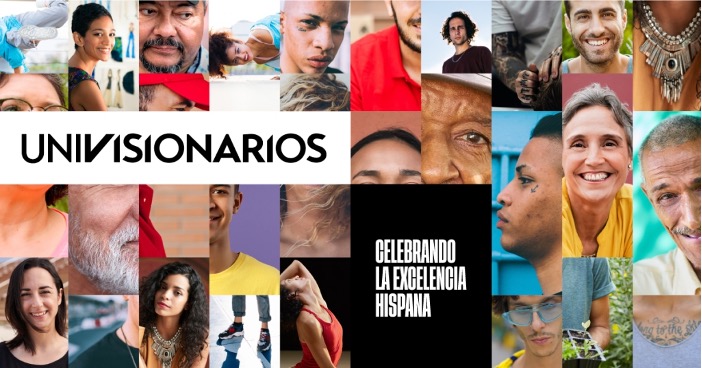 MIAMI – AUGUST 11 – Univision Noticias, the award-winning news division in TelevisaUnivision, is pleased to invite viewers to vote for their preferred Mi UniVisionario nominee ahead of the first edition of UniVisionarios, an initiative celebrating Hispanic excellence.

UniVisionarios, presented by trailblazing journalist Teresa Rodriguez, is a Univision Noticias initiative that celebrates Hispanic community leaders in the United States and how their contributions are advancing our community and the nation. An esteemed advisory board will choose ten finalists – and our audience will choose one finalist in the MiUnivisionario category – that will ultimately be awarded $10,000 to the foundation of their choice as they continue to strive for a stronger community. UniVisionarios goes beyond announcing an annual list of the most influential Hispanics – it is a conversation about their contributions to strengthening their communities. This initiative will recognize and celebrate scientists, entrepreneurs, educators, artists, and advocates, as each plays a vital role in the prominent and growing Hispanic cultural landscape.

“Univisionarios celebrates Hispanic leaders and the impact they have on helping their communities thrive within the United States,” said Teresa Rodriguez. “This initiative, which will culminate within Hispanic Heritage Month – with a gala in Washington, D.C. on September 22 –  honors the culture, efforts, and strength of the Hispanic community.”

The nominees are divided into six categories – Mi UniVisionario; Maestros (Masters); Pioneros (Pioneers); Emprededores (Entrepreneurs); Innovadores (Innovators); and Iconos (Icons). Within each category, the nominees all demonstrate a positive social impact on the Hispanic community in the country. For example, the Iconos (Icons) category recognizes the great stars and high-profile personalities who break barriers by making the time and effort to promote a better opportunity to thrive for their community. Thus far, David “Big Papi” Ortiz and Mariano Rivera have been announced – the third Icono will soon be announced.

The ten finalists that will be chosen will attend the UniVisionarios gala on September 22 in Washington, D.C. The gala will feature performances from top artists, participation from Univision Noticias anchors, journalists, and talent, and engagement from notable Hispanic community leaders.

MEET THE ADVISORY BOARD

Gloria Estefan: Multiple GRAMMY award-winning singer, actress, songwriter, author of two New York Times best-selling children’s books, philanthropist, and humanitarian. Honored with the Presidential Medal of Freedom. She is the founder of the Gloria Estefan Foundation whose mission is to support charitable programs for disadvantaged children and empower young people through education and opportunity. The Foundation also supports spinal cord research through the Miami Project to Cure Paralysis.

Emilio Estefan: Multiple GRAMMY Award-winning musician, songwriter, record and television producer, best-selling author, filmmaker, and cultural ambassador. Honored with the Presidential Medal of Freedom, a star on the Hollywood Walk of Fame and the Songwriters Hall of Fame presented him with a lifetime achievement award.

Dolores Huerta: Celebrated Latina labor leader, activist, and community organizer. She has worked for civil rights and social justice for over 50 years. In 1962 she and Cesar Chavez founded the United Farm Workers union. In 2002, she received the Puffin/Nation $100,000 prize for Creative Citizenship which she used to establish the Dolores Huerta Foundation. DHF connects community-based organizing to state and national movements to register and educate voters; advocate for education reform; bring about infrastructure improvements in low-income communities; advocate for greater equality for the LGBT community, and create strong leadership development. Dolores is a two-time US Presidential Award Recipient; she received the Medal of Freedom Award from President Obama in 2012, and the Eleanor D. Roosevelt Human Rights Award from President Clinton in 1998.

Jose Antonio Tijerino: President and CEO of the Hispanic Heritage Foundation, a national nonprofit focused on education, workforce, social impact, and culture through innovative leadership. HHF under Tijerino’s leadership is recognized as a creative, agile, impact-focused organization recognized by The White House, US Congress, Fortune 500 companies, other nonprofits, and the Government of Mexico. Tijerino is also an executive producer of the Hispanic Heritage Awards at the Kennedy Center, which are broadcast on PBS.

Dr. Julio Frenk: A fourth-generation physician whose paternal grandparents fled Germany in the early 1930s to build a new life in Mexico, Julio Frenk catalyzed his deep gratitude for the kindness of strangers into a lifelong mission to improve the health, education, and well-being of people around the world. He has held various leadership roles in global health including serving as an executive director at the World Health Organization and as Mexico’s Secretary of Health. He also leads Harvard’s T.H. Chan School of Public Health. In 2015, he became the sixth president of the University of Miami.

Pedro Greer: Dr. Greer has been an advocate for health equity by engaging communities to create effective health and social policies and accessible health care systems. He established Camillus Health Concern, Inc. and Saint John Bosco, health centers for underserved populations in Miami-Dade County, Florida. He has received numerous recognitions, including the Bob Graham Center for Public Service 2017 Citizen of the Year; 2014 National Jefferson Award in the category of Greatest Public Service Benefiting the Disadvantaged; 2013 Great Floridian Award; the 2009 Presidential Medal of Freedom; 1997 Presidential Service Award and in 1993, was honored as a MacArthur Foundation “Genius Grant” Fellow.

Mark Hugo Lopez: Director of race and ethnicity research at Pew Research Center, where he leads the planning of the Center’s research agenda focused on chronicling the diverse, ever-changing racial and ethnic landscape of the United States. He is an expert on issues of racial and ethnic identity, Latino politics and culture, the U.S. Hispanic and Asian American populations, global and domestic immigration, and the U.S. demographic landscape. Lopez was previously the Center’s director of Global Migration and Demography, and of Hispanic research.

Silvia Acevedo: Notable systems engineer and businesswoman. Acevedo began her career at NASA’s Jet Propulsion Laboratory, where she was part of the Voyager 2 team. She has also been an executive at technology companies like Apple, Dell, and IBM. She currently sits on the Qualcomm board of directors. She was the executive director of Girl Scouts of the United States from 2016 to 2020. In 2011, former President Barack Obama named her a member of the Hispanic Commission on Educational Excellence.

Alberto Mendoza: Director of the John S. Knight Journalism Fellowships at Stanford University. Previously, Mendoza was executive director of the National Association of Hispanic Journalists (NAHJ) for five years. He has also been a mentor in Facebook’s Sustainability Accelerator program, among others. He has nearly 26 years of experience in the nonprofit sector, 18 of them as CEO. He is the founder of Honor41.org, an organization that honors figures from the Latino LGBTQ community.

Claudia Romo: Advocate and catalyst for change. Romo is the founder of “We Are All Human Foundation”, a non-profit foundation based in New York, dedicated to promoting the agenda of diversity, inclusion, and equity, which has had a great impact on the unification of the Hispanic community. She has 25 years of experience working with organizations such as the United Nations, the World Economic Forum or UNICEF. She has received numerous awards. She has been included in ALPFA’s Most Powerful Latinas list and was part of People magazine’s 25 Most Powerful Latinas in 2020.

About Univision News
TelevisaUnivision’s award-winning News division is committed to informing one of the country’s fastest-growing segments of the population across all media platforms, including TV, Radio, and Digital. Hispanics count on the latest and most relevant content that impacts the community through: “Noticiero Univision,” the Network’s noon, evening, late evening, and weekend national newscast; Sunday public affairs program “Al Punto” (To The Point); newsmagazine shows “Aquí y Ahora” (Here and Now) and “Primer Impacto” (First Impact); as well as morning news segments on “Despierta América” (Wake Up America), and its newly launched streaming news channel “Noticias Univision 24/7” on ViX. In addition, Univision has strengthened its news team and expanded its news operations by adding Investigative, fact-checking, and Infographics Units.