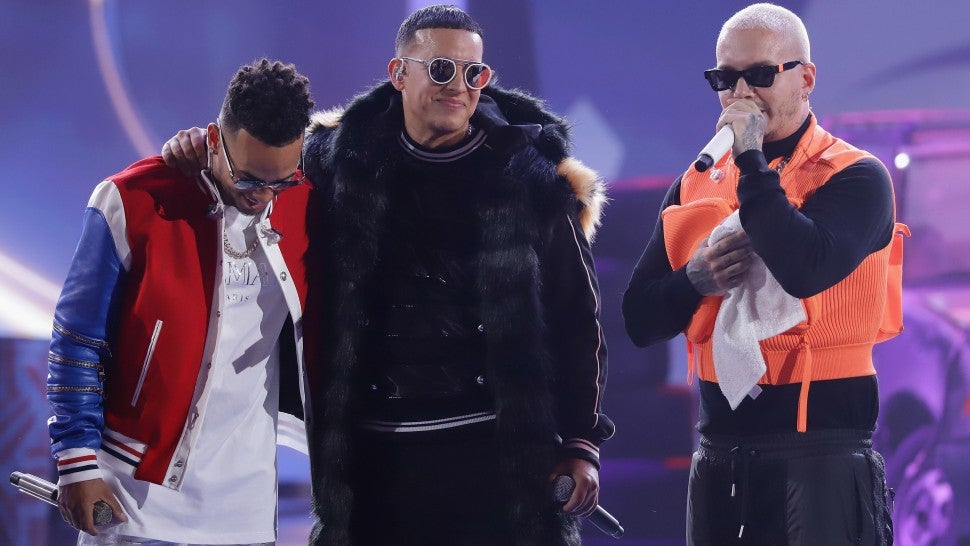 It was all about Daddy Yankee at the 2019 Premio Lo Nuestro Awards.

The reggaetonero was honored with the Lifetime Achievement Award at Thursday’s awards ceremony in Miami. But before accepting the honor, he — along with J Balvin, De La Ghetto, Ozuna, Yandel and Zion & Lennox — took the stage to give a dynamic performance of his greatest hits, including “Lo Que Pasó, Pasó,” “Rompe,” “Ella Me Levantó” and “Gasolina.”

Yankee, dubbed the king of reggaeton, kicked off the show with “Rompe” with De La Ghetto by his side. It was followed by Zion & Lennox bringing the crowd to their feet with “Ella Me Levantó.”

Yandel then came out to sing “¿Qué Tengo Que Hacer?” with DY. Ozuna continued the party by taking it old school with “Lo Que Pasó, Pasó.” The party did not stop there, as Balvin and Yankee brought the house down with a stellar rendition of “Gasolina.”

After the performance, his Lifetime Achievement Award was presented to him by all the rappers, who bowed down as the audience applauded the legend. Balvin then took a moment to explain how Yankee has inspired his career.

“There would be no J Balvin without Daddy Yankee,” he said. “Thank you for what you have done for us… I am honored to be presenting the jefe, the big boss, Daddy Yankee with the Lifetime Achievement Award.”

Humbled by the kind words, Yankee then thanked his fans and fellow artists.

“I wouldn’t be here without the support from my fans, my colleagues who are here De La Ghetto, Zion & Lennox, the veterans Yandel and the new legends like Balvin and Ozuna,” Yankee expressed. “Thank you for being with me here tonight. To all the other reggaeton artists who are here tonight, our genre has grown because we are united.”

He concluded by giving his hometown Puerto Rico a shout out and to let people know that they can do whatever they want if they work hard.

Yankee was nominated for a total of five Premio Lo Nuestros at this year’s ceremony.

ET spoke with Balvin during rehearsals, where he expressed how honored he was to perform with the Rey of Reggaeton.

“Man, it’s a blessing, you know,” Balvin said of the opportunity to show the rapper some love. “I think this moment is so special for us, you know, the fact that I’m a part of that, I’m so grateful because he really inspires me to be where I’m at right now. He was the one who, like, really showed us the light to follow that lead.”