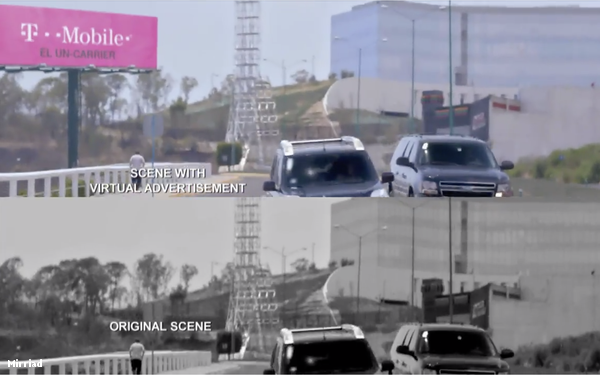 Dynamic, virtual advertising is continuing to push its way into television and video programming.

One of the latest entrants is Spanish-language broadcaster Univision, which partnered with ad tech firm Mirriad to bring virtual advertising to its popular telenovelas.

Mirriad’s technology allows for things that appear in shows, like billboards, posters, or websites, to be replaced dynamically to promote a product or brand.

It can also do more advanced changes, like replacing a car in the background with one from another manufacturer or model.

“It came about through the lens of how do we restructure our breaks to make them shorter, more innovative, have less clutter and also allow brands to expose themselves to audiences in a way that is meaningful, authentic and simple to execute,” Luis De La Parra, Univision senior vice president, partner solutions, tells Digital News Daily.

The way it works is fairly simple.

Completed shows are fed into Mirriad’s system, which identifies scenes with branding opportunities. It then tells the network that there are, say, 300 seconds available in an episode for a brand to be placed.

The network can then try and sell some or all of that space, then use the tech to place the ads.

Univision chose Mirriad because of its existing work in Europe and Latin America, where the programming is similar.

De La Parra says the response has been strong, particularly in the movie category, where billboards promoting new films can be placed in scenes. He cites tech, automotive and CPG as other categories that make sense for the format.

‘If you are in the scatter market and want to buy something very particular or special, this is the right environment. It could be very efficient for certain brands,” De La Parra says.

The insertions also help the network monetize programming it has acquired from other countries. Local productions may feature local brands, but the virtual ad tech allows for U.S. brands to be overplayed on top of the existing ads.

“A lot of our productions are in Mexico, so putting U.S. brands into our novels brings it home,” De La Parra says.

For now, Univision is using the tech on its telenovelas, which present new episodes every day, though De La Parra says they will soon be bringing it to UniMás, a Univision channel that emphasizes reality programming.