About 11 million Hispanics voted in the 2012 presidential election, fewer than half of those who were eligible. Activists in both major political parties have been trying to increase that number, through voter registration drives and appeals over issues like immigration and wage stagnation on the left, and economic freedom on the right.

Now, so is Univision.

The company, including its top-rated Spanish-language network and many subsidiaries, is making an ambitious nationwide effort aimed at registering about three million new Latino voters this year, roughly the same number who have come of voting age since 2012.

The initiative will entail an aggressive schedule of advertisements on all of Univision’s video and digital platforms, including 126 local television and radio stations and the sports channel Univision Deportes. Station managers will exhort their audiences in old-fashioned editorials, a comprehensive online voter guide will be updated throughout the election season, and the media company will use the kinds of grass-roots organizing events usually staged by candidates — town-hall-style forums and telephone banks — to try to turn its viewers into even more of a powerhouse voting bloc than it already is. 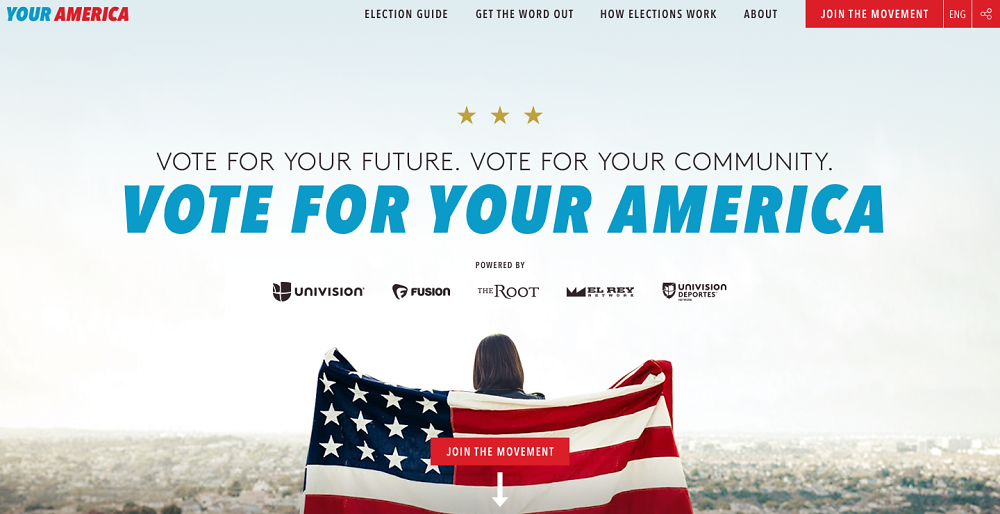 “The rule is no one can make it to the White House without the Hispanic vote,” said Jorge Ramos, the network’s news anchor. “That’s why Latino registration is incredibly important. Just a few votes in Nevada, Florida and Colorado could make or break any candidate.”

One of the network’s youngest telenovela stars, William Valdés, 22, will chronicle his becoming a citizen and registering to vote in a video and on social media.

And this summer, Univision will hold voter drives near the stadiums hosting the Copa América soccer tournament, and run public-service announcements during its broadcasts of those matches, which are expected to reach millions.

The effort extends to all of Univision’s digital properties, including Fusion, its digital platform that is intended to engage a millennial audience. It has also enlisted The Root, a digital property dedicated to African-American issues, in what Univision calls a “multicultural effort.”

For Univision, the voter drive on all cylinders sums up what sets it apart from the nation’s biggest English-language television networks, whose ratings it has frequently surpassed in recent years. Its mission is not only to inform and entertain, but also to “empower the Hispanic community.” And as that community shares a language but not necessarily an ethnicity or national origin, empowerment means serving as a unifying voice and a mobilizing, galvanizing force.

Roberto Llamas, the network’s executive vice president, said that with the election fast approaching, “We just kind of told ourselves, if our population is on the move, then it’s more important than ever for us to participate at rates higher than we have.”

Yet for a network frequently accused of Democratic-leaning advocacy, owned in part by Haim Saban, one of Hillary Clinton’s top financial backers — and whose anchor, Mr. Ramos, has had contentious run-ins with the Republican front-runner, Donald J. Trump — talk of throwing its weight around in politics may raise questions about whether the initiative is really a Democratic voter-mobilization effort in disguise. 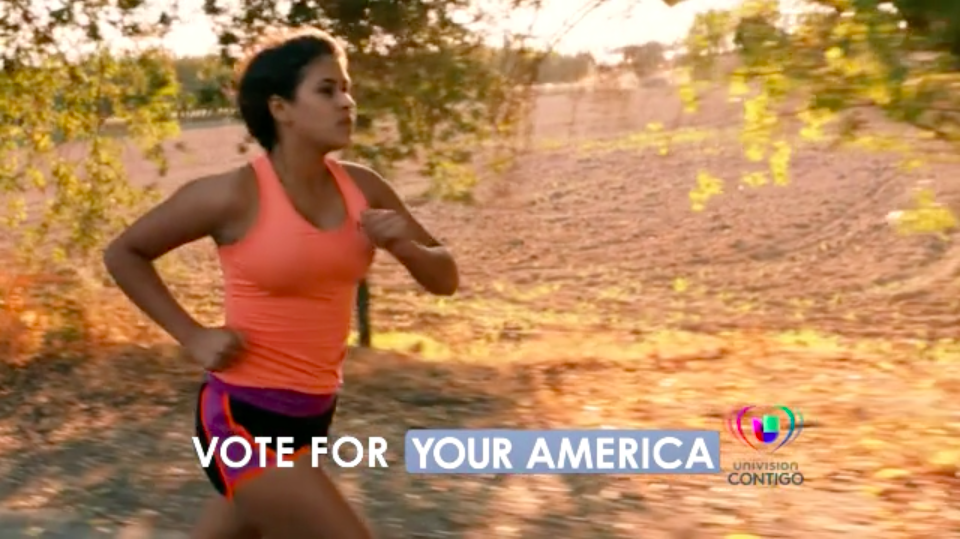 One of the public service announcements that Univision will release encouraging people to register to vote. By UNIVISION CONTIGO on Publish Date

The network insists it is nonpartisan, and says the voter registration drive, targeting the estimated 27 million Hispanics who are eligible to vote, will be agnostic as to political party. Still, 71 percent of Latinos voted for President Obama in the last election cycle, according to the Pew Research Center ’s Hispanic trends studies.

And that was before Mr. Trump, with his heated promises to crack down on illegal immigration, handed Mr. Ramos an issue in which to build a crusade.

“The real challenge is to convince Latinos to go out and vote, and what is really interesting is that maybe Donald Trump is doing that,” Mr. Ramos said in an interview. “Young voters, especially those who are turning 18 and are young, they are telling me that they are getting involved because of Donald Trump. Not because they like Donald Trump, but because they want to vote against him.”

The challenge, though, is indeed real: Turnout for Hispanic voters in 2012 was 48 percent. For blacks it was 67 percent; for whites, 64.1 percent, according to Pew’s research.

Increasing the percentage of eligible Hispanics who actually register and vote could have major effects in November — not only in the presidential race, but also in important Senate contests, among other races. The races in Florida to fill Marco Rubio’s seat, and in Nevada for Harry Reid’s, are both tossups in states with large Latino populations.

Both parties had hoped to make inroads among Hispanics this year before the Republican primaries became overtaken with hard-line talk on immigration, but Democrats began with a head start. President Obama and the Democratic ticket won the support of nearly 7 of 10 Hispanic voters in 2012, exit polls showed. And despite Republican gains in 2014, Democratic House candidates retained 62 percent of the Hispanic vote.

Univision’s efforts in the 2016 election do not stop at Mr. Ramos’s on-camera activities or the network’s extracurricular voter mobilization work. Its news division is sponsoring a Democratic debate on March 9 and, on July 14, a general election forum with the eventual Republican and Democratic nominees. It is planning a series of swing-state polls on the candidates and issues. And it has its largest political team yet — 16 reporters, 20 producers and dozens of digital journalists — assigned to Destino 2016, the network’s election coverage.

Its political programs give in-depth attention to issues the network sees as of interest to Hispanic viewers, explaining policy debates on immigration, trade deals, health care, wage standards, the tax code and other matters affecting workers and small business owners.

The registration campaign, similarly, will try to make the process of signing up to vote as simple as possible, with no basic knowledge assumed, officials involved in the effort said.

“When most Latinos become voters, they’re likely to be the first in their families,” said Clarissa Martínez-de-Castro, deputy vice president of N CLR, a Latino organization also known as National Council of La Raza, a partner with Univision. “Things that seem simple, like where do I register, what do I need to know, what do I need? It’s a pretty big task.”

Other television networks have tried to take up the mantle of voter registration when they saw their audiences as significantly underrepresented in national elections. MTV memorably partnered early on with a nonprofit, Rock the Vote, that pioneered telephone and online registration systems in the 1990s to try to get more young people to the polls.

The results have been mixed, and attributing them to initiatives like Univision’s is an imperfect science, experts say. “There’s a certain surface of plausibility to their claims and goals,” said Donald P. Green, a professor of political science at Columbia who studied the effects of Rock the Vote’s 2004 television commercials on voter turnout. “But I think that it still ranks in the category of untested hypothesis.”

Univision may have advantages that its predecessors lacked, said Melissa Michelson, a professor of political science at Menlo College in California who studies Latino voter mobilization.

“Univision is uniquely positioned to pull this off because of their dominance in the market,” because it is a “trusted source,” and because it has tried something like this before, Ms. Michelson said. In 2012, the network worked to help thousands of viewers become United States citizens.

In the interview, Mr. Ramos sounded mindful of that effect and eager to flaunt it.

“In the past, we were described as the sleeping giant,” Mr. Ramos said, speaking broadly about the Latino community, but perhaps also about Univision itself. “But the giant has awakened. Now we have to show that power.”