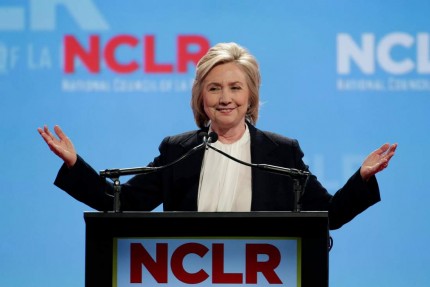 Hillary Clinton is a winner among Hispanic voters.

That’s the takeaway from a survey of Hispanic voters conducted for Noticias Univision. When asked who they would vote for if the presidential election were to take place today, 64% of respondents said they would pick Clinton. Former Florida Governor Jeb Bush was Clinton’s closest Republican rival but significantly trailed the Democratic candidate at 27%.

The bipartisan survey, conducted by Bendixen and Amandi and The Tarrance Group, found that Clinton edged out Bush–49% to 44%–even in a head-to-head match in Florida.

Clinton doesn’t just decimate the Republican competition. While 73% of respondents said they would vote for her in the Democratic primary, 68% said they did not know or have not yet formed an opinion about Vermont Senator Bernie Sanders, one of Clinton’s chief Democratic rivals.

The survey also revealed Hispanic public opinion of Donald Trump after his derogatory comments about Mexican immigrants, and found that 79% of Hispanic voters found his comments offensive. If the Republican primary were held today, only 7% would vote for Trump, compared to 38% voting for Bush, 22% for Florida Senator Marco Rubio and 12% for Texas Senator Ted Cruz.

Despite only 16% of those surveyed identifying as Republican, compared to 58% as Democrats, more respondents said they were conservative than liberal.

That being said, only 15% said they would vote for a candidate who is opposed to legalizing undocumented citizens, a stance many of the Republican contenders have taken. Immigration isn’t the only issue important to Hispanic voters: an “overwhelming majority of voters” consider job creation and the state of the nation’s economy, education, healthcare and immigration, in that order, the most important campaign issues.

The Hispanic vote will be key for presidential contenders in 2016, with recent projections placing the number of Hispanic people living in America at 55 million. Latinos made up an estimated 8% of voters in the 2014 election and the Hispanic electorate is expected to double by 2030.