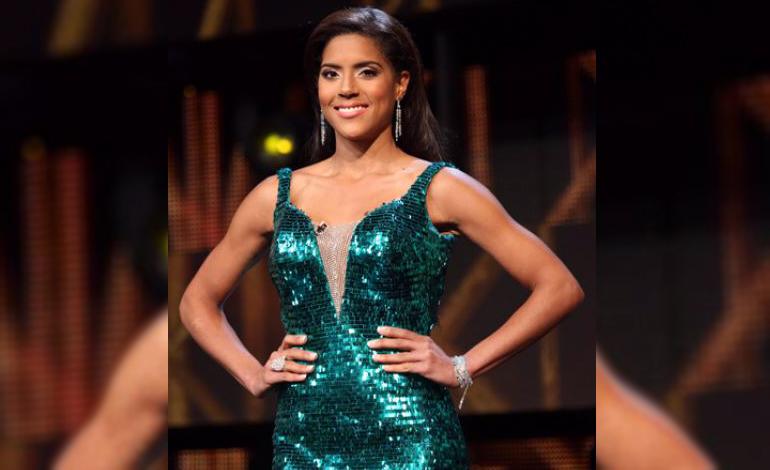 What a night it was! After a season full of glamour, excitement and a lot of drama, a new Nuestra Belleza Latina has been crowned! The girls of NBL gave their all and impressed the judges and the public after a night full of performances, challenges and gorgeous gowns.

The show started with an amazing entrance by Beauty Guru, Osmel Sousa, holding the crown, this entry appears to have become his trademark for the Finale. Next, the finalists had to face some of the audience’s critiques on social media. The ladies showed an enormous amount of professionalism. Just like last year, Univision reminded the public about all the challenges the finalists had to go through during this season of NBL. The contestants’ best and worst moments were shown in an entertaining collage of videos and images.

In order to receive the crown, the finalists: Nathalia Casco (Honduras), Catherine Castro (Puerto Rico), Francisca Lachapel (Dominican Republic) and Clarissa Molina (Dominican Republic), had to survive one last challenge in which they had to show off their abilities in front of the cameras, and on stage next to Mexican Actor and Host Alan Tacher and Dominican TV Anchor Lourdes Stephen. The judges: Jaqueline Bracamontes, Osmel Sousa, and Jomari Goyso gave their final advices to the girls after the challenge and they emphasized that the night was a Tribute to them, not a competition anymore.

The first award of the night was People Magazine’s Award to Nathalia Casco who was voted, once again, “NBL Chica People” after the judges’ critiques. Osmel called her a Phoenix, due to her ability to get back up after all those times she was knocked down during the competition. The biggest surprise occurred when Nathalia’s mom showed up behind her after accepting the honor, making it the most emotional moment of the night. Eduardo Verástegui, who didn’t miss the chance to promote his new production “Little Boy,” was in charge of delivering Televisa’s CEA (Centro de Educación Actoral) Scholarship to Catherine Castro.

Throughout the night, the finalists were pampered with oustanding performances presented by the show’s fabulous hosts: Chiquinquirá Delgado and Javier Poza. Celebrities gracing the stage included: Paulina Rubio and Morat who delighted the audience with “Mi Nuevo Vicio” as the opening number. Prince Royce sang “Que Cosas Tiene El Amor” next to Anthony Santos for the first time on TV. Ricky Martin performed his popular hit “Disparo al Corazón.¨ Espinoza Paz was also present with his song ¨Perdí la Pose,¨ and J Álvarez made the stage “burn” with his single “Temperatura.” Nathalia, Francisca, Clarissa, and Catherine were, of course, showcased during the musical numbers. Last but not least, NBL’s own Aleyda Ortiz enchanted the audience with a special number before the crowning of the new “Nuestra Belleza Latina.”

Towards the end of the transmission, Chiquinquirá and Javier started announcing this year’s runner-ups: Clarissa Molina was the third runner-up, followed by Catherine Castro as the second runner-up.

And finally, the moment we were all waiting for! A battle between, the controversial Nathalia Casco, and funny girl Francisca Lachapel, and the winner of Nuestra Belleza Latina is…Francisca Lachapel! The Dominican Republic wins the crown after two years of being in the finals! Congratulations!