The Wall Street Journal reports on IHS Study: "Hispanics Could Account for 40% of U.S. Job Growth by 2020"

written by NICK TIMIRAOS for THE WALL STREET JOURNAL on Feb 24, 2015 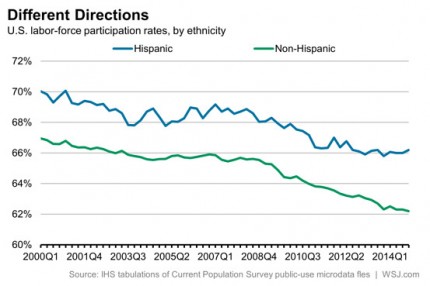 The U.S. Hispanic population will account for 40% of employment growth over the next five years and more than 75% from 2020 to 2034, according to a new study.

That’s around 11 million jobs out of 14 million new positions across the economy.

Job growth among the Hispanic population is particularly notable given that the growth of the non-Hispanic working age population is set to slow to near zero as the number of new non-Hispanic workers will barely match the drop from retiring baby boomers, according to the study from IHS Global Insight, an economic forecasting firm.

The forecast sees Hispanic labor-force growth set to accelerate by an average 2.6% over the next 20 years, even as the labor force will grow by 0.6% for the country as a whole from 2020 to 2034.

The result is that the Hispanic share of U.S. employment will increase to 23% over the next two decades, from 16% last year, according to the study by James Gillula, managing director at IHS.

The forecast assumes that Hispanic population growth will slow from its current pace, given the gridlock over an immigration overhaul in Washington, and uses Census Bureau estimates for Hispanic fertility and mortality rates. (The Homeland Security Department could run out of funding Friday over a dispute between Republican leaders and President Barack Obama. Republicans haven’t been willing to fund the bill unless Mr. Obama withdraws executive actions issued last fall that shield millions from deportation).

A separate forecast examines higher Hispanic immigration growth, using levels that prevailed during the last economic expansion. Under that scenario, gross domestic product could increase at a 3% annual average over the 20-year forecast period, compared with 2.5% in the baseline forecast.

The Obama administration, for its part, says higher immigration would do more than any other policy to grow the labor force and productivity, which it says will be needed to counter rising costs from an aging population over the next 20 years. 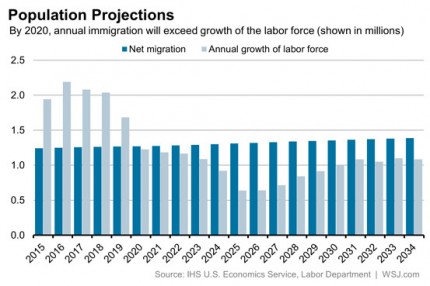