UniVisionarios is presented by Emmy-award-winning journalist Teresa Rodriguez who was the first Latina to host a national newscast in the United States.

Out of the 25 nominees, 72% are women – strengthening the diversity, voices, and contributions that Hispanic communities bring forth. 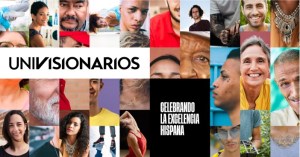 MIAMI – AUGUST 18 – UniVisionarios is a Univision Noticias initiative that celebrates the contributions, ideas, and leadership of Hispanic community leaders in the United States. The initiative will consider the contributions of 25 nominees and choose ten who will ultimately be awarded $10,000 to the foundation of their choice as they continue to strive for a stronger community.

UniVisionarios is presented by Emmy® award-winning journalist Teresa Rodriguez, who was the first Latina to host a national newscast in the United States. Rodriguez, recognized for her impactful reporting, is a founding member of Univision’s Women’s Leadership Council, an initiative that helps empower future leaders within the business world. Rodriguez’s work is a leading prelude to her role in UniVisionarios.

“All of the nominees chosen for UniVisionarios have demonstrated exceptional empathy and community building across the nation,” said Teresa Rodriguez. “The fact that we have a majority of women nominees highlights the diversity and empowerment involved in the positive impact to our thriving community.”

Of the 25 nominees, 18 (72%) are women – strengthening the diversity, voices, and contributions that Hispanic communities bring forth within the United States. Within the Pioneros (Pioneers) category, all nominees are women – all of whom have created innovative strategies to assist people with disabilities to find employment and opportunities to thrive; rebuild homes in Puerto Rico after Hurricane Maria; help undocumented families facing separation from their children; expand health services to Latino communities. These contributions are only within the Pioneers category. Within the other categories, the women nominees have developed entrepreneurial and innovative contributions that have pushed for the Hispanic communities to flourish within their respective areas.

As of 2021, the Department of Labor reported that Latinas are now the largest group of women workers in the U.S. behind non-Hispanic white women. Numbering more than 12 million, Latinas account for 16% of the women-labor force, which is projected to continue growing. Further, Latinas’ political power is projected to increase as the U.S. becomes more diverse and voters of color continue to grow in political representation. In 2020, a record number of Latinas ran for Congress. Meet the Latina UniVisionario nominees and learn about their contributions to the Hispanic community and the nation below.

In this category, 100% of the nominees are women. This category recognizes those who have innovated and prepared the path for others to follow. They break barriers and overpass frontiers to become leaders in their respective areas and communities. Meet:

In this category, the nominees have developed creative projects that positively impact their communities in the United States. Meet:

In this category, the nominees have leveraged their relationships and personalities to generate impactful social change locally and nationally. In addition, through their ideology and knowledge, they have developed a significant social impact. Meet:

In addition to the women mentioned above, UniVisionarios is pleased to introduce the remaining nominees, who, regardless of gender, inspire to create a more diverse and robust community.

This category recognizes the big stars and personalities that have broken barriers with their voice, image, and positive actions.

Latinos continue to break barriers and transform politics, philanthropy, and communities – their participation in Univisionarios is only an example of the power and strength that Hispanic and Latino communities have across the United States. Among the 25 nominees, ten finalists will be chosen and attend the UniVisionarios gala in Washington, D.C., on September 22, recognizing Hispanic Heritage Month. Out of those 10, one will be awarded $10,000 to donate to the cause of their choice.

About Univision News
TelevisaUnivision’s award-winning News division is committed to informing one of the country’s fastest-growing segments of the population across all media platforms, including TV, Radio, and Digital. Hispanics count on the latest and most relevant content that impacts the community through: “Noticiero Univision,” the Network’s noon, evening, late evening and weekend national newscast; Sunday public affairs program “Al Punto” (To The Point); newsmagazine shows “Aquí y Ahora” (Here and Now) and “Primer Impacto” (First Impact); as well as morning news segments on “Despierta América” (Wake Up America), and its newly launched streaming news channel “Noticias Univision 24/7” on ViX. Univision has strengthened its news team and expanded its news operations by adding Investigative, fact-checking, and Infographics Units.