“Double digit revenue growth in the second quarter caps off a stellar first half of 2022. The second quarter saw a historic quarter of ad sales growth in Mexico and a U.S. Upfront that grew mid-teens to the highest volume we have had in seven years. In the U.S., I’m thrilled to see advertisers demonstrating their commitment to support and grow with U.S. Hispanic audiences,” said Wade Davis, CEO of TelevisaUnivision. “This growth allowed us to fund the launch of both ViX and ViX+ in the first half of 2022 without any material decline in EBITDA. The fact that the growth of our core business can fund our investments in streaming highlights the power of our unique assets and the quality and focus of our execution. With our full streaming service launched, we are poised to supercharge the already impressive growth of our core business with the massive global Spanish language streaming opportunity. We are just getting started on executing on our vision and I am excited about what’s ahead for TelevisaUnivision.”

Unless stated otherwise, all comparisons are quarterly, pro forma 1, relative to the prior year.

Discussion of financial and operational results

The Company has decided that for comparable purposes, all explanations will be made on a pro forma basis.

Consolidated revenue grew 11% to $1.1B. Advertising revenue increased 11% driven by strong Upfronts in both the U.S. and Mexico, market share increases, and growth in both linear and streaming.

In the U.S., advertising revenue increased 10%. The company continued to benefit from the 2021/2022 broadcast Upfront which produced volume and price growth among the highest in its history. The quarter also reflected strong growth in demand for Advanced Marketing Solutions, where revenue grew 66%. The company’s U.S. networks’ share of Spanish language primetime viewing rose 40bps to 63.2% while its share of total television primetime viewing also rose 20bps to 7.0%.

Subscription and Licensing revenue increased 10% in total, and 10% in each of the U.S. and Mexico. The increase was primarily due to revenue growth from virtual MVPDs, following carriage at YouTube TV which began in Q3 2021. In addition, the Company benefitted from the Reorganization4   that took place in May 2021.

Total operating expenses grew 24% to $723 million. The increase primarily reflects investments in streaming, following the launch of the ViX AVOD service on March 31, and ahead of the ViX+ SVOD service launch on July 21. Adjusted OIBDA decreased 8%.

The Company refinanced approximately $1.5 billion of debt, leading to an extended maturity profile and greater portion of interest expense that is effectively fixed rate. The company’s leverage ratio, or net debt to EBITDA, was unchanged from the prior quarter-end at 5.5X. Cash on hand ended the quarter at $684 million, with incremental liquidity through available credit lines.

On January 31, 2022, Grupo Televisa, S.A.B (“Televisa”; NYSE:TV; BMV:TLEVISA CPO) and Univision Holdings II, Inc. (“UH Holdco”) (together with its wholly owned subsidiary, Univision Communications Inc., “Univision”) announced the completion of the transaction between Televisa’s media content and production assets and Univision. The new company, which is named TelevisaUnivision, Inc. (the “Company” or “TelevisaUnivision”), creates the word’s leading Spanish-language media and content company. TelevisaUnivision will produce and deliver premium content for its own platforms and for others, while also providing innovative solutions for advertisers and distributors globally.

On March 12, 2021, Univision Holdings, Inc (“UHI”) entered into a reorganization agreement, which closed on May 18, 2021, pursuant to which, among other things, UH Holdco (formally known as Searchlight III, UTD, L.P. “Searchlight”) became the 100% owner of the issued and outstanding capital stock of UHI through a series of transactions (the “Reorganization”). Prior to the Reorganization, UH Holdco held a non-controlling interest in UHI. Upon consummation of the Reorganization, the existing Searchlight entity was converted into a Delaware corporation and re-named Univision Holdings II, Inc. As a result of the Reorganization, a new basis of accounting was established at May 18, 2021 (the “Reorganization Date”), which resulted in the remeasurement of the Company’s assets obtained and liabilities assumed to fair value as of such date. The periods prior to the reorganization date are identified as “Predecessor” and the period after the reorganization date is identified as “Successor”.

As the leading Spanish-language media and content company in the world, TelevisaUnivision features the largest library of owned content and industry-leading production capabilities that power its streaming, digital and linear television offerings, as well as its radio platforms. The Company’s media portfolio includes the top-rated broadcast networks Univision and UniMás in the U.S. and Las Estrellas and Canal 5 in Mexico. TelevisaUnivision is home to 36 Spanish-language cable networks, including Galavisión and TUDN, the No. 1 Spanish-language sports network in the U.S. and Mexico. With the most compelling portfolio of Spanish-language sports rights in the world, TelevisaUnivision has solidified its position as the Home of Soccer. TelevisaUnivision also owns and manages 59 television stations across the U.S. and four broadcast channels in Mexico affiliated with 222 television stations, Videocine studio, and Uforia, the Home of Latin Music, which encompasses 57 owned or operated U.S. radio stations, a live event series and a robust digital audio footprint. TelevisaUnivision is home to the global streaming services ViX and Blim TV, which altogether host over 50,000 hours of high-quality, original Spanish-language programming from distinguished producers and top talent. The company’s prominent digital assets include Univision.com, Univision NOW, and several top-rated digital apps. For more information, visit televisaunivision.com.

(Unaudited and in thousands) 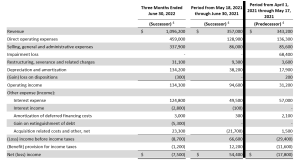 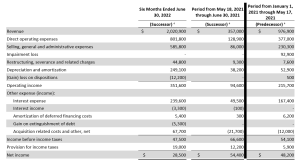 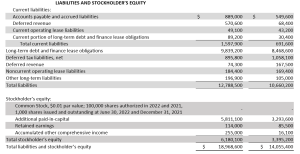 (Unaudited and in thousands) 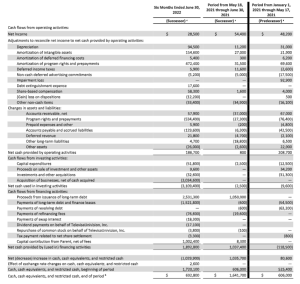 2 Unless stated otherwise, all ratings information in the U.S. is presented for Adults 18-49 in Spanish-language primetime, and in Mexico is People 4+, 28 cities Nielsen IBOPE.

3 See page 8 for a description of the non-GAAP term Adjusted OIBDA, a reconciliation to net income and limitations on its use.

6 Impairment loss in 2021 is related to the write down of FCC licenses, program rights and charges to certain lease assets.

8 Other adjustments in 2022 and 2021 to operating income are primarily comprised of unusual and infrequent items as permitted by our credit agreement and operating expenses in connection with COVID-19.