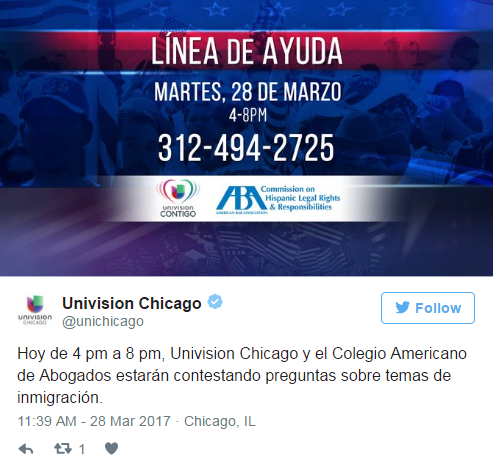 On Tuesday, volunteer Spanish-speaking ABA attorneys in Chicago will be manning a phone bank to answer immigration questions in an event co-sponsored by Univision Chicago and the American Bar Association.

For the past two years, the ABA Commission on Hispanic Legal Rights and Responsibilities has partnered with the television station to provide legal information every Tuesday on the 10 p.m. evening news. Spanish-speaking attorneys who are ABA members answer questions from viewers and social media, or address topics that have arisen in the news. For example, after Chicago announced a minimum wage increase, they aired an employment law segment. Viewers with follow-up questions could contact the commission, which would provide answers for basic questions and make referrals for people who needed legal representation.

In the wake of President Donald Trump’s inauguration, Univision Chicago reached out to the Hispanic Commission and asked them to partner with the station to provide guidance on immigration law to viewers. On Tuesday from 4 p.m. to 8 p.m. Central, Spanish-speaking immigration attorneys will be on hand to answer immigration-related questions from callers and social media. The volunteer attorneys won’t provide individualized legal advice, but they can explain the current state of immigration law and its possible repercussions in areas like family law or education rights, or refer people to nonprofit organizations that help with legal issues.

The Hispanic Commission hopes that this inaugural phone bank will be the first of many held across the country in collaboration with the ABA Commission on Immigration, the ABA Center for Pro Bono and the ABA Standing Committee on Legal Aid and Indigent Defendants. The next city in their sights is Washington, D.C., but any metro area with a large Spanish-speaking population will be considered. If an attorney is interested in helping organize a phone bank in their region, they can contact the Hispanic Commission.