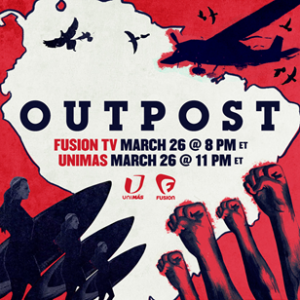 MIAMI, FL – MARCH 16, 2017 – Airing on two networks in two languages beginning on March 26, the new docu-series ‘OUTPOST,’ a Story House Entertainment production, produced by i am OTHER, bridges investigative journalism with adventure travel to share untold human, social and cultural stories. Season one focuses on stories based in Latin America that resonate on a global scale. The series will air Sunday nights with English versions airing on FUSION TV @ 8PM and 11PM (channel listings) and with Spanish versions airing on UniMas @ 11PM; both networks will debut the series with back-to-back half-hour episodes on March 26, see episode descriptions below.

The inaugural season of the twelve-episode series focuses on stories and locals from Haiti, Brazil, Colombia, Nicaragua, the Dominican Republic, Bolivia, Cuba, Argentina, Honduras, Chile and more. From Oaxaca to Argentina and Easter Island to Paraguay, the docuseries offers an offbeat and immersive exploration of Latin America.

‘“Outpost’ is a truly immersive series, one that explores the subcultures, and societal and social issues that are truly relatable in every way and certainly transcend borders. We are proud to offer something utterly fresh and original – content that tackles the unexpected and provides viewers with a series that provokes, entertains, and informs,” said Christian Gabela, General Manager of Story House Entertainment.

In FUSION’s premiere week episodes, “Empowering New Voices” features Carmen Carrera in Sao Paulo, Brazil and Gabriel Leigh in El Alto, Bolivia, as they explore the various ways people are raising their voices and taking back the power. In “The Wild Coast,” Mike Tyson travels to Suriname to discover the long-running tradition of songbird contests, where small birds compete against one another in signing battles.

In the UniMás premiere week episode, “The Power of One,” Vytenis Didziulis ventures to Rio and Gabriel Leigh heads to Chile as they highlight personal stories of how one person can make all the difference. In “Environmental Survival,” the massive effort to save the Amazon and Easter Island are examined, with Vytenis Didziulis.

Additional topics explored throughout the season include: Jon Batiste discovering how music is helping the people of Haiti rise out of the rubble from the 2010 earthquake, Maya Gabeira meeting women who are rescuing young girls from sex trafficking, Rudy Mancuso investigating how the power of the Internet can help to shape today’s culture and political landscape, Michaela DePrince learning how Cuba is navigating its future as it undergoes massive changes, Jason Silva exploring the Latin America drug world and more.

“Empowering New Voices” looks at the various ways people are making themselves heard and taking back the power.

“The Wild Coast” zones in on the forgotten corner of South America, the Guyanas, exploring its history and traditions.

“The Power of One” delves into three amazing stories about individual struggle that exemplify how, sometimes, one person can make all the difference.

“Environmental Survival” explores the massive effort to save the Amazon and an island test case for what happens when humans destroy their environment.