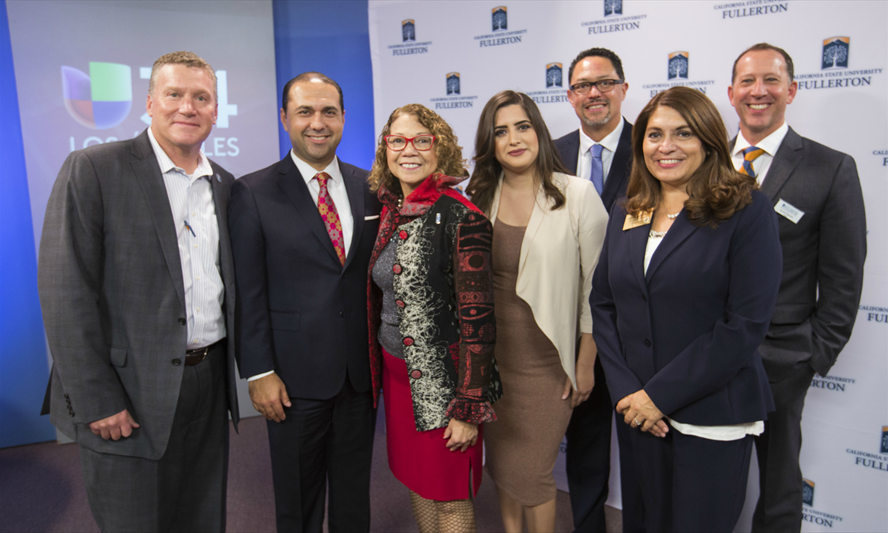 Titan Communications – made up of television studios, radio sets and web broadcast and editing rooms used primarily by students – is nestled on the lower level of Cal State Fullerton’s Pollak Library.

Now, thanks to the College of Communications’ new partnership with Spanish television network Univision Los Angeles, a news bureau has made its way into the Titan Communications family.

“As a Hispanic-serving institution and number one in California in graduating Latinos with bachelor’s degrees, I am so very proud that this partnership is here at Cal State Fullerton,” said CSUF President Mildred García, who spoke at the ribbon-cutting ceremony of her persistence to make the partnership a reality over the past couple of years.

The bureau will house Univision senior reporter and anchor Francisco Ugalde, who has worked at Univision for more than 20 years. Ugalde will report on news stories throughout Orange County and the Inland region. He also will serve as an on-campus resource for communications students.

That is what the network hopes to do by extending its resources to CSUF. Through the partnership, Univision will continue to strive to give Latinos in Southern California a voice, as well as empower and inform them, Patiño said.

Univision officials said the partnership also will expand internship and employment opportunities for CSUF students who want to break into bilingual communications.

This month, three communications-broadcast students were offered employment at the network.