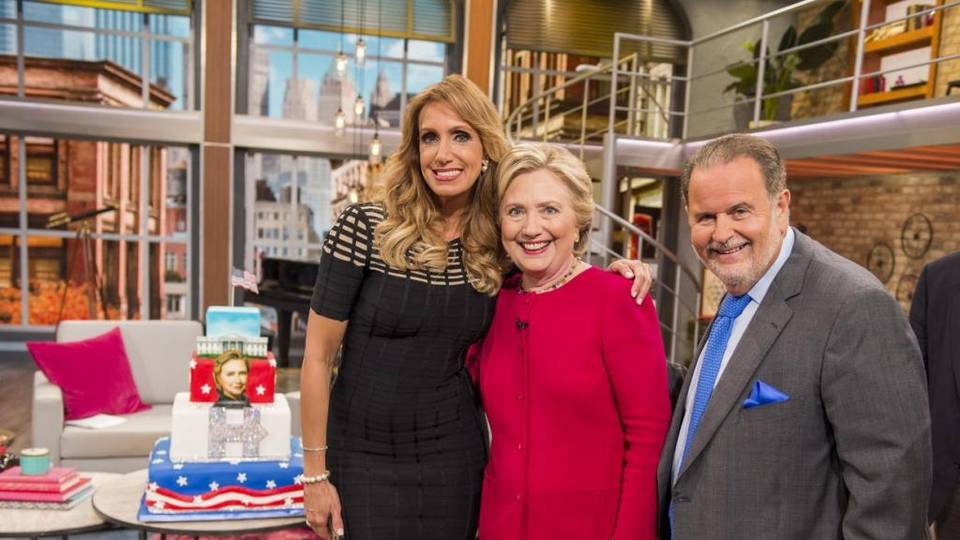 Call it a pachanga. That’s what Univision’s “El Gordo y la Flaca” called it, a party, when they welcomed Hillary Clinton on their show Tuesday afternoon.

Spanish-language TV hosts Raúl De Molina and Lili Estefan interviewed the presidential candidate at their studios in Doral just one day before her birthday. Clinton appeared in a bright red blazer and black pants for the final 20 minutes of the show.

The gang celebrated with a four-tier cake, chocolate chip cookies and Cuban cafecito — although the Secret Service didn’t allow Clinton to drink it.

Clinton was interviewed in English, and another broadcaster translated over her statements in real time.

“The most important thing of all of this is the name of the show— El Gordo y la Flaca,” De Molina said. “In English that translates to ‘the good-looking guy and the skinny lady.” (El Gordo really means The Fat Man.)

“I’m not going to argue that,” Clinton said as laughter filled the set.

During the show, Clinton discussed how her brother once worked for the Peace Corps in Colombia. She also talked about Damian Lopez, a Mexican-born soldier who died in combat in Iraq in 2005 while awaiting American citizenship.

That was a mariachi band’s cue to play Cumpleaños Feliz as surprise guest Prince Royce sang along. Near the end, Clinton even danced some salsa with De Molina. The sound track? “Vivir la Vida,” by Marc Anthony.

Estefan: “So they are getting together just for you?”

Clinton: “That’s what I’m told. I want to bring people together!”

De Molina referred to the election as “crucial.”

“What’s important during this campaign is that you all go out and vote on Nov. 8,” he said. “It’s important for us Latinos because, once again, it will make the difference.”