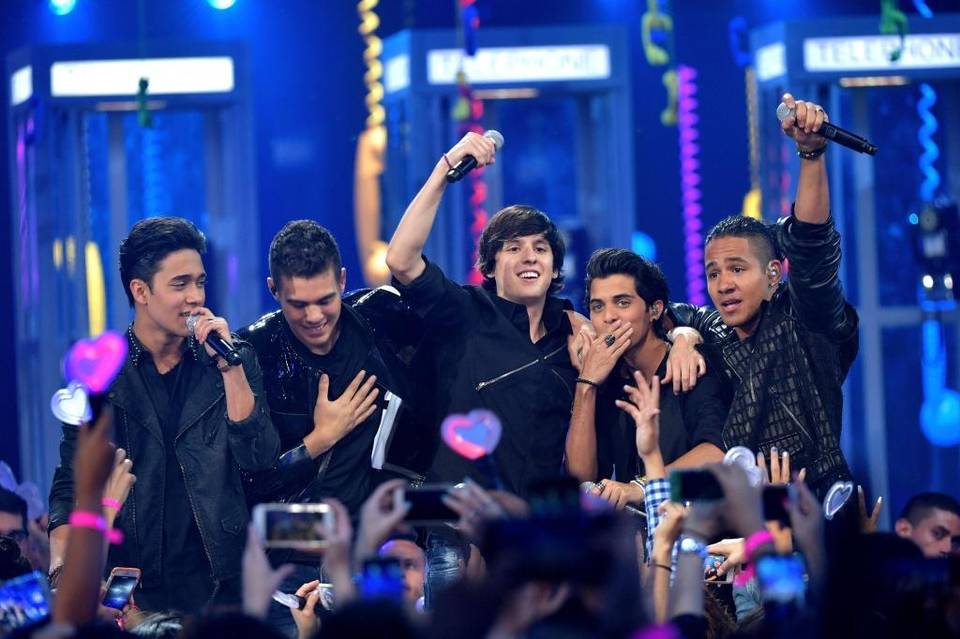 Premios Juventud may be a sort of Latino version of the Teen Choice Awards, but Thursday night’s show on Univision was heavy on nostalgia, with a #TBT theme and a slew of ’90s acts, including Los Del Rio in that definitive example of “WHY-did-we-love-this?” earworm crossover, “La Macarena.” Elderly Spanish duo Los Del Rio joined Cuban reggaeton stars (whose crossover bridge is over the Florida Straits) Gente de Zona and a giant streaming collage of online videos of fans wiggling to the song their parents shook their booty to 20 years ago.

Broadcast live from the University of Miami’s BankUnited Center in Coral Gables, Premios Juventud is an odd combination of social media savvy (young Latinos are among the most devout and prolific users) and old school music industry muscle. The biggest winners of the night were five member boy band CNCO (a play on cinco, Spanish for “five”), created on Ricky Martin’s reality show competition “La Banda” — broadcast, naturally, by Univision. CNCO’s five wins included not only My Pop/Rock Artist but also My Favorite Twitter Celebrity (Mi Tuitero Favorito — the category names are so much better in Spanish) and #PJLook.

They were preceded by ’80s boy band Magneto, a sort of Mexican version of 1970s Puerto Rican teen phenomenon Menudo (where Ricky Martin got his start) which has reunited to tour this year. And so it went.

Winners were chosen by fan votes online — where you should never underestimate the pop passions of millions of tween and teen girls. And so hunky Vine celeb David Lopez, whose hilarious takes on Mexican-American life and cliches have gotten over 3.5 billion loops, won for 6 Seconds of Fame. J Balvin, the doe-eyed hearthrob singer of R&B/bachata ballads, won for My Favorite Fan Army (most dominating fan club) and also performed his breakout hit, a bachata version of the R&B classic “Stand By Me.” Longtime tropical pop star Marc Anthony (who’s leapt into the business side by launching an entertainment company, Magnus Media, in Miami) showed savvy by performing his “La Palida” with Luis Figueroa, who won the From Cover to Cover prize for his Youtube covers of pop hits. Anthony also lofted Gente de Zona’s growing U.S. status by joining them on “La Gozadera,” the massive song that won for The Perfect Combination (or best duo), with a video filmed partly in Havana.