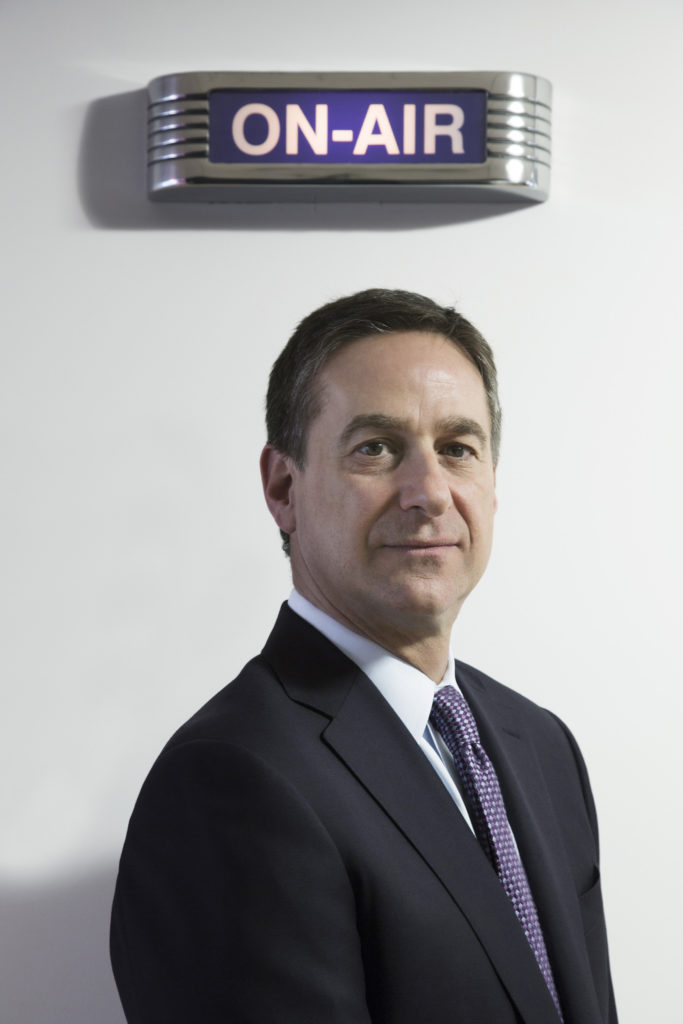 Jonathan Schwartz, JD ’86, at the Univision studio in Manhattan (Photo by Ethan Hill)

There is a dizzying view from the lobby of Univision’s Manhattan headquarters on the 33rd floor of a mid-town skyscraper—tall windows framing the iconic skyline, the vista metaphor for the American dream that the media conglomerate has come to embody for its largely Hispanic audience.

But the atmosphere here is not the typical hush of corporate America. Colleagues gather in the hall chatting, there’s laughter and warmth—it’s welcoming. In addition to greeting business visitors, the receptionist fields calls from Univision viewers seeking advice completely unrelated to the sports, novelas, entertainment, and news that Univision provides. They call asking how to register to vote, how to sign a child up for kindergarten, how to get in touch with a local representative, how to find a doctor. These are the questions of people finding their way in new neighborhoods, new cities, new countries. And for many, the trusted source for answers is Univision.

“Univision really operates in a special place. Our company serves as a source of information and acts as a lifeline for its audience—the Hispanic community in America,” says Jonathan Schwartz, JD ’86, chief legal and corporate affairs officer. “The people here understand that the company’s overriding mission for more than 50 years has been to educate, inform, and empower a rapidly growing segment of the American population. Univision started acting in a socially responsible way long before many companies embraced that goal.”

Univision is seeking to innovate as it serves a population that expects more multi-cultural and millennial-themed content. Schwartz helped to negotiate several strategic transactions to broaden Univision’s offerings, including the company’s recent deal to acquire the entire Fusion network from The Walt Disney Corporation, as well as to make investments in the satirical publication The Onion and the African-American-focused media outlet The Root. “We want to make our rich and diverse content available on every social and digital platform that our audiences use,” he says.

Univision has also made a conscious effort to increase the number of women watching its two broadcast and nine cable networks, especially on the Univision Deportes Network, the top-rated Spanish-language cable sports network. “I know from my own two daughters, who play competitive soccer, that soccer viewing in the U.S. is a strong passion point for women as well as for men and UDN has had great success targeting those viewers.”

As the largest ethnic minority in the U.S., Hispanic Americans now count for 17 percent of the population—a figure that is estimated to reach nearly 30 percent by 2060. The English-language media world is taking notice too.

“Major advertisers have woken up to the fact that Univision’s viewers reflect a fast-growing and diverse demographic, both in size and in buying power,” he says. “Our advertising base now includes Fortune 100 corporations that underspent with Hispanic audiences in the past. The competition is not just Spanish-language media, but all media, regardless of language or culture.”

Univision has also launched an ambitious voter registration drive with the goal of registering before November many of the 3 million Latino voters who have turned 18 since 2012. “Your America”—complete with a marketing campaign across all of Univision’s networks and an online guide to registering to vote with digital reminders of critical deadlines—may boost the Latino vote, which four years ago barely reached 50 percent of the approximately 24 million eligible voters at the time.

This commitment to more than the corporate bottom line is what attracted Schwartz to Univision. “People really do believe that they’re working for a bigger purpose here, which can be hard to find in corporate America,” he says.

These are heady days for Univision. For Schwartz—who leads not only the legal team, but the government relations, community affairs, corporate social responsibility, and compliance areas as well—it is the culmination of a career in law that has included a commitment to service and has taken what some might call unexpected turns—each position interesting and meaningful, each move building on the next.

In the early 1990s, New York City was in the grip of a drug-fueled crime epidemic, the number of murders each year in the thousands (today, it’s in the low hundreds). At the time, Schwartz was a federal prosecutor who joined an innovative violent gangs unit in the prestigious U.S. Attorney’s Office for the Southern District of New York.

“Many of the murders then were not random, but associated with organized and very violent street gangs,” explains Schwartz. So he and his colleagues got creative. “We applied the same tools that had been used for decades against the Mafia—witness protection programs, wiretapping, the RICO statute—and approached these crimes from an enterprise basis, not as one-offs.” In one case alone, Schwartz led a team that successfully prosecuted more than 15 members of a violent street gang in the Bronx that was responsible for 14 murders and a host of other violent crimes.

His interest in criminal justice and public service was first sparked in law classes with Professors Mark Kelman, Bob Weisberg, JD ’79, and Barbara Babcock. “These were not just phenomenally smart professors, but also good and decent and approachable people. They helped me to grow as a lawyer and as a person,” he says.

Schwartz was named the Nathan Abbott scholar in 1986 for graduating first in his law school class and then spent a year as a Fulbright scholar at Cambridge University, where he earned a master’s degree in international relations. Schwartz next clerked for Judge Harry Edwards, whom he counts as a mentor and, today, a friend. His second clerkship was with Supreme Court Justice Thurgood Marshall.

“I don’t think I ever quite got over the fact that I was working, every day for a year, for the person who argued and won in Brown v. Board of Education,” Schwartz says. “Having role models like Justice Marshall and Judge Edwards certainly solidified my interest in public service.”

After five years as a federal prosecutor in New York, Schwartz joined the leadership offices of the Department of Justice in Washington, D.C., working directly for Attorney General Janet Reno and Deputy Attorney General Jamie Gorelick.

“When I started as deputy attorney general,” says Jamie Gorelick, now a partner at Wilmer Cutler Pickering Hale and Dorr, “I asked the most senior career prosecutor in the department to find me the two smartest, most able prosecutors in the whole department, of which there were 10,000 at the time. And Jon was one of the two.”

What was supposed to be a six-month assignment turned into five years.

At DOJ, Schwartz helped craft policy for the Clinton administration on complex legal policy and political issues such as the use of marijuana for medical purposes. He also sat on the Attorney General’s Capital Case Review Committee, which reviewed all potential capital cases after the federal death penalty was reinstated in the wake of the bombing of an office building in Oklahoma City (when he had a chance to work closely with Supreme Court nominee Merrick Garland). Schwartz worked on a host of other sensitive issues as well, ranging from the return of assets seized by the Nazis in World War II to the application of the then-independent counsel statute.

Working as a senior leader of a 100,000-person federal agency, with a budget of more than $20 billion was, Schwartz says, an incredible experience. “DOJ is filled with thousands of lawyers and agents from the FBI, DEA, U.S. Marshals Service and, back then, the INS. You often had very talented, but very strong-willed people, significantly disagreeing over decisions and policy direction,” says Schwartz. “The key part of my job was to see whether, as a senior advisor to the attorney general and deputy attorney general, I could serve as an honest broker, but if need be drive consensus within the department.”

He was good at it too.

“Jon was able to dive deeply into a wide variety of legal and policy issues very quickly and get to the heart of the matter,” explains Gorelick. Schwartz would also often serve as DOJ’s external representative to the White House, with other Cabinet agencies, and to Congress.

As the Clinton administration was winding down, his time at DOJ ending, the newly married Schwartz started to look at how he could find the same fascinating work in the private sector. “I thought about how I could replicate the experience—to advise senior leaders of a high-profile entity about a range of challenging legal issues that are under the spotlight. That’s what led me to think about becoming a general counsel.”

Schwartz found a startup in Silicon Valley that fit the bill. The peer-to-peer music sharing company Napster was embroiled in multiple law suits challenging its business model and needed a GC. Before jumping in, he sought advice on the move from key people in his life. One was Judge Edwards.

“We spent many, many hours talking,” says Edwards. “The Napster move was very tricky—it was not intuitive. And we talked about the advisability of it—how Jon would segue into corporate counsel work, and so on. Those conversations were really important.”

Schwartz moved back to the Bay Area, welcomed the birth of his first child at Stanford Hospital, and rolled up his sleeves for some steep legal challenges.

“I joined Napster with the goal of helping to get the company out of court and to develop a licensed, sustainable music download model,” he says. “We ultimately were able to get to the negotiating table and were very far along in negotiating license deals. But, in the end, it did not succeed because we did not have the revenues to match the damages being sought to settle the litigation and because our funding ran out.”

After Napster, Schwartz moved back to New York, first joining AOL-Time Warner as deputy general counsel for a year and then becoming GC of Cablevision, where he stayed for six years. Schwartz detoured to JP Morgan after the financial crisis of 2008 and served for three years as GC of the global investment bank. “I’ve had a strong interest in finance since my undergraduate days at Wharton,” he says. “With a team of over 800 people in 35 countries—the job truly was global.”

But Schwartz found his way back to the media sector when he joined Univision in 2012. “I love media—it’s so fast-paced and fascinating, with the technology changing all the time,” he says. “Content is now being consumed on every platform available and there is enormous pressure to keep up with consumers who want that content anywhere and anytime.”

And Univision is not sitting still. “We’re here to capture a much bigger slice of viewership by developing programming that appeals to viewers who are increasingly expecting content to be delivered digitally and in a mobile format, while also continuing to grow audience share around our traditional in-demand news, entertainment, and sports programming,” says Schwartz.

There are very few typical days for him at Univision, with a tight-knit team spread among New York, Washington, D.C., Miami, and L.A. He has to both keep up with, and anticipate, issues at the critical intersection of law, technology, and policy.
That his team and the company are diverse is more than a bonus for Schwartz. “There’s a premium on diversity in this company. Many key positions are held by women and more than 70 percent of the 4,000 or so employees are Hispanic. All of our corporate communications are in both Spanish and English,” he says.

Schwartz seems to have found the right place—a company with a corporate culture he can believe in.

“Given the demographic change that’s happening so quickly in our country, I am privileged to have a front seat in a rapidly transforming America,” he says. “Univision isn’t just any company, but a company that sits at the forefront of change—both demographically and culturally.”