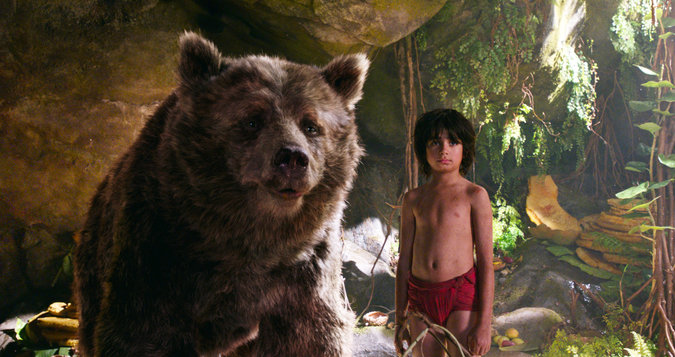 Baloo the bear, voiced by Bill Murray, and Mowgli, portrayed by Neel Sethi, in a scene from “The Jungle Book.” Credit Disney/Disney, via Associated Press

“All of this, honestly, is one big magic trick.”

Those words, spoken by the director Jon Favreau, were meant to sum up the technological wizardry on display in his hyperrealistic remake of “The Jungle Book,” which was largely created with computers. But Mr. Favreau could also have been describing the way Walt Disney Studios used marketing sleight of hand to fill seats on opening weekend. “The Jungle Book” took in an astounding $103.6 million in North America, according to Disney.

Studios hate to discuss their marketing for fear of coming across as corporate versions of Kaa, the slippery “Jungle Book” python who hypnotizes prey. (“Trusssst in me.”) But movies — especially ones as tricky as “The Jungle Book,” a stylized film based on a cartoon musical, based on a classic book — do not sell themselves. Here are some of the tricks that Disney, which declined to comment, used to move the masses:

Toss Red Meat to the Base

In August, Mr. Favreau bounded onto a 7,800-seat arena at a Disney fan convention in Anaheim, Calif., and showed sneak-peek footage from his film. He hobnobbed with three “Jungle Book” stars on stage, including Neel Sethi, who plays the man-cub Mowgli. Thousands of movie posters were handed out.

This was the first marketing stunt for “The Jungle Book,” which cost roughly $175 million to make. By going to happy, peppy Disneyphiles first, Disney ensured that the movie’s initial blast on social media would be a positive one.

Talking Animals: Not Just for Babies

When animals talk in a movie, unless it’s a comedy, older moviegoers tend to skip it. Most of Mr. Favreau’s animals are not cartoonish and cuddly (not by a long shot), but Disney could not rely on trailers and TV spots to convey that message.

Stars are another way to make adults pay attention. To elevate “The Jungle Book” in the minds of grown-ups, Disney in March circulated dramatic photographs that paired voice actors with their onscreen characters — Idris Elba with the tiger Shere Khan, Ben Kingsley with the panther Bagheera, Lupita Nyong’o with the wolf Raksha.

Men and Boys, Boys and Men

Generally speaking, women and girls see Disney’s magic castle logo on a trailer and are pulled closer. The opposite can be true with guys. So Disney aggressively and repeatedly pitched “The Jungle Book” to male audiences.

Commercials on ESPN portrayed the movie as coming not from the studio that made “Cinderella” but “from the studio that brought you ‘Pirates of the Caribbean.’” An extended 3-D trailer for “The Jungle Book” was attached to “Star Wars: The Force Awakens,” which had an audience that was 58 percent male.

And Disney rolled out an action-oriented trailer during the Super Bowl.

Reaching Out in Spanish

Studio marketers have learned that Hispanic moviegoers tend to buy tickets in particularly large groups; if you hook one family member, you can get an exponential result. To achieve that goal, Disney teamed with Univision for a five-week stunt that brought “Jungle Book” characters and clips to telenovelas, talk shows and sports coverage. Disney even built a tool to allow Univision personalities to appear in scenes.

Not Just a Film. It’s an Immersive World

If moviegoers believe that, they are more likely to spend $3 to $5 more a ticket to see “The Jungle Book” in 3-D, which can lift opening-weekend sales considerably. To emphasize the scope and scale of this movie, Disney introduced a mazelike Law of the Jungle website in partnership with the female-leaning Tumblr; ran special promos at IMAX theaters focusing on the snake Kaa; and created a touring virtual-reality experience and 360-degree Facebook video emphasizing the “Avatar”-like world of its jungle.

Various corners of the Disney Empire pitched in to promote “The Jungle Book.” A New Year’s Day stunt on the Disney Channel, for instance, was used to portray the film as one of the year’s first blockbuster offerings for families and children.

But the synergistic heavy lifting was done by Disney theme parks. During the jam-packed spring break weeks, park theaters in Florida and California offered sneak-peek footage of the movie, with Mr. Favreau providing introductions.

The many (many) theme park stores that sell Disney merchandise had “Jungle Book” sections. And Disney built photogenic “Jungle Book” sand sculptures at its Animal Kingdom and Epcot parks in Florida.