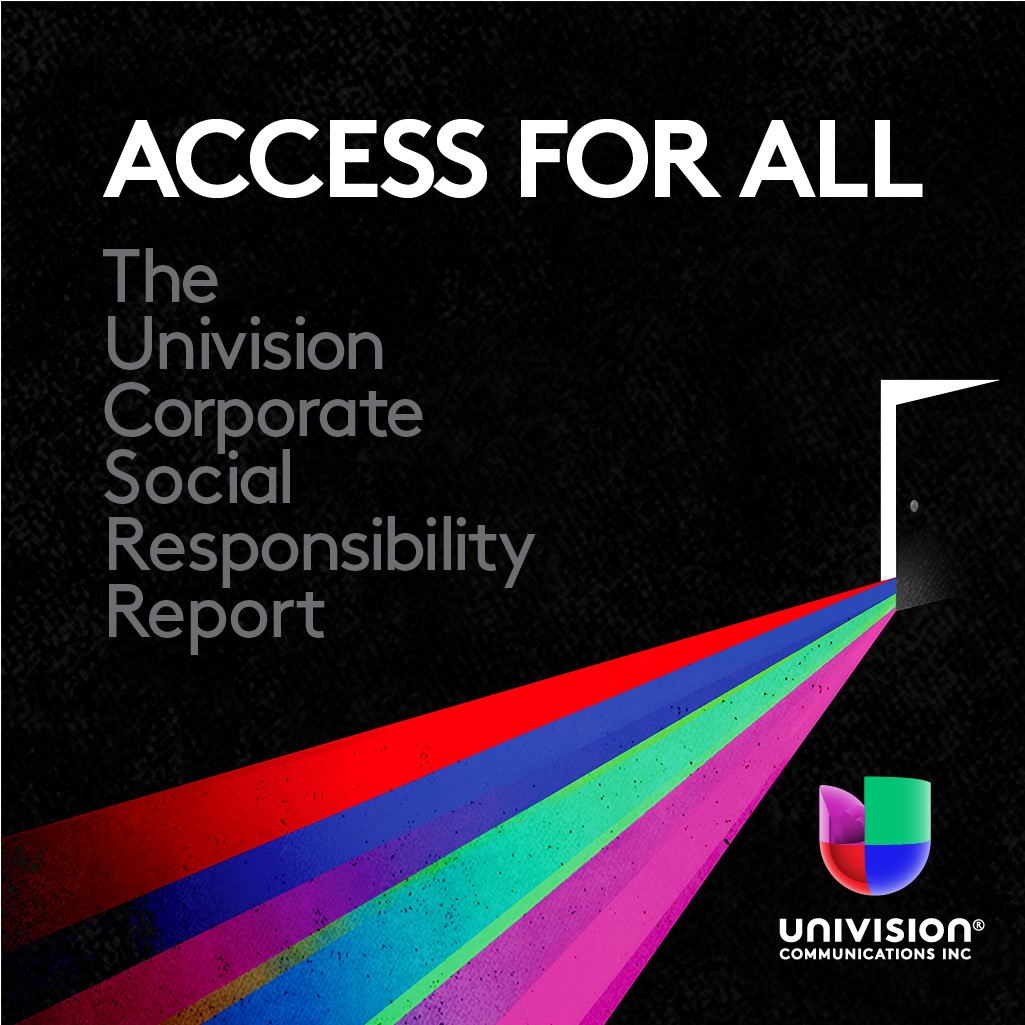 “For nearly 60 years, Univision’s mission has been to entertain, inform and empower the Hispanic community in the United States. And as our community grew and became increasingly more diverse, so did we,” said Randy Falco, president and chief executive officer, UCI. “Today, we find ourselves at the center of a new America, energized by the potential that lives within our country’s most vibrant multicultural populations. Now more than ever we are proud of how, working with our partners, we continue to deliver on our responsibility to the communities we serve. Our inaugural corporate social responsibility report showcases how our corporate values of integrity, collaboration, innovation, diversity, service and excellence come to life.”

“Over the course of our history we have strived to deliver the best information and resources to Hispanic families across the U.S. During this time, we have cultivated deep community relationships based on trust, service and results,” said Ivelisse Estrada, senior vice president, Corporate and Community Relations, UCI. “Univision has proudly served our communities thanks to the hard work of dedicated community partners, employees, talent and news teams from San Antonio to Los Angeles and Miami to Chicago.”

“Access for All” includes insights, initiatives and stories about how UCI’s commitment to corporate social responsibility is strategically aligned with its mission of informing, empowering and entertaining Hispanic America. Key focus areas captured in the report are detailed below.

The Company We Keep

As a mission-driven company, diversity and inclusion are the backbone of Univision. Univision believes that companies should be diverse by design, and has created and implemented a number of programs – including employee impact groups such as eMERGE (millennials), Orgullo@UCI (LGBTA) and the Women’s Leadership Council – that promote professional development among all employees regardless of race, religion, age, sexual orientation, or gender identity. By accelerating access to professional growth among all employees, from interns to top executives, Univision is growing and retaining a diverse workforce at all levels – setting the bar for diversity in the industry.

Looking ahead, UCI plans to break more barriers by offering ambitious new programs to ensure even more opportunity for media careers among the U.S. Hispanic population. In partnership with Televisa, Univision recently announced it is launching efforts to increase the pipeline of Latinos in media and technology by supporting the education of future leaders and professionals in these fields through writer’s programs, incubator programs, and development fellowships.

For more nearly 60 years, Univision has provided vital news and information to the community it serves in language and in culture – all day, every day. Univision’s national and local newscasts have earned the trust of the community by doing whatever it takes to deliver the news that matters to its community most – from daily challenges like navigating school systems to lifelong concerns like immigration, family, faith, and finances.

Univision celebrates Latino culture through its extensive distribution of entertainment, music, and sports content. With the growth of FUSION and Flama and recent acquisitions of The Root and The Onion, Univision is more inclusive than ever before, investing in multicultural content and a commitment to reach more people on a growing number of platforms.

The Communities We Serve

Univision advocates tirelessly for the communities it serves through Univision Contigo, which promotes awareness and provides access to resources in areas such as education, health, prosperity, and civic participation.

Univision understands that a lifelong pursuit of learning, from pre-school to post-grad, helps Latinos to succeed. Children are the key to our future, and as the largest and fastest-growing minority group in grade school, it’s not a stretch to say that Hispanic children in particular will be very influential to the development of our country. As America’s longest-running public service campaign on education, the Univision Contigo Educación initiative brings awareness to the importance of education, and puts valuable tools and resources into the hands of parents and students alike. In 2015, more than 40,000 attendees participated in Univision education fairs nationwide.

Part of the American dream is having a healthy family and leading a healthy life. Univision Contigo is helping the community to achieve these goals by informing and empowering Hispanic America through a multitude of health and wellness initiatives, with a special focus on promoting healthy lifestyles and providing for children in need. As part of the Camino A La Salud (Road To Health) fairs, which visited 12 markets in eight days, Univision served more than 32,000 attendees and facilitated 10,000 free health screenings. In June 2015, 342,000 people nationwide registered for the interactive nutritional and fitness challenge Reto 28. Additionally, in 2015, Univision rallied viewers and listeners to raise $15.7 million for Teletón USA and another $3.5 million for St. Jude Children’s Research Hospital.  Together, we can ensure that Latinos of all ages have the information and motivation they need to live long, thriving lives.

Latinos today are a powerful and growing force in America’s economic landscape and their prosperity is critical to the growth of this country. Univision and its partners are laying the groundwork for U.S. Hispanic financial success — arming U.S. Hispanics with an understanding of the inner workings of personal finances and professional entrepreneurship. More specifically, Univision Contigo’s Prosperity initiative promotes financial literacy through a series of informative events aimed to help families across the country set goals, manage finances, rely less on loans, save money, protect themselves from debt, and understand helpful services from financial institutions. In 2015, 3,000 business owners participated in business boot camp sessions and another 60,000 people attended prosperity fairs and town halls from Los Angeles to Miami.

Through its nonpartisan Civic Participation initiatives, Univision Contigo is taking strides to ensure Hispanic voices have access to the information they need to be heard in the electoral process. In February 2016, Univision unveiled the groundbreaking “Vote For Your America” campaign to engage multiculturals, millennials and 27 million eligible Hispanic voters. The effort includes the first-ever “Vote For Your America” Digital Election Guide, a Bilingual Text Message Tool, on-air and multiplatform messaging, and hundreds of local events leveraging 126 local TV and radio stations. Univision Contigo is also proactively helping eligible Latinos become citizens through the “Hazte Ciudadano” campaign that, in turn, allows them to play an integral role in the U.S. democracy.

Further commenting on the report, Falco said: “The brilliant work featured in this report is the result of collaboration among many amazing individuals and organizations. We are extremely thankful to the teams that continue to make the power of Univision come to life and make a difference through the important initiatives detailed in the report. By working together – from our dedicated Univision employees to neighborhood grassroots organizations to some of the biggest philanthropic and nonprofit groups in the country – we can help ensure access for all, as this report so clearly articulates.”

The full report can be viewed or downloaded on the company’s website at www.univision.net/csr. 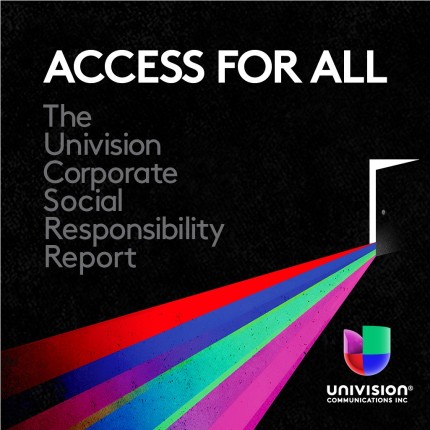