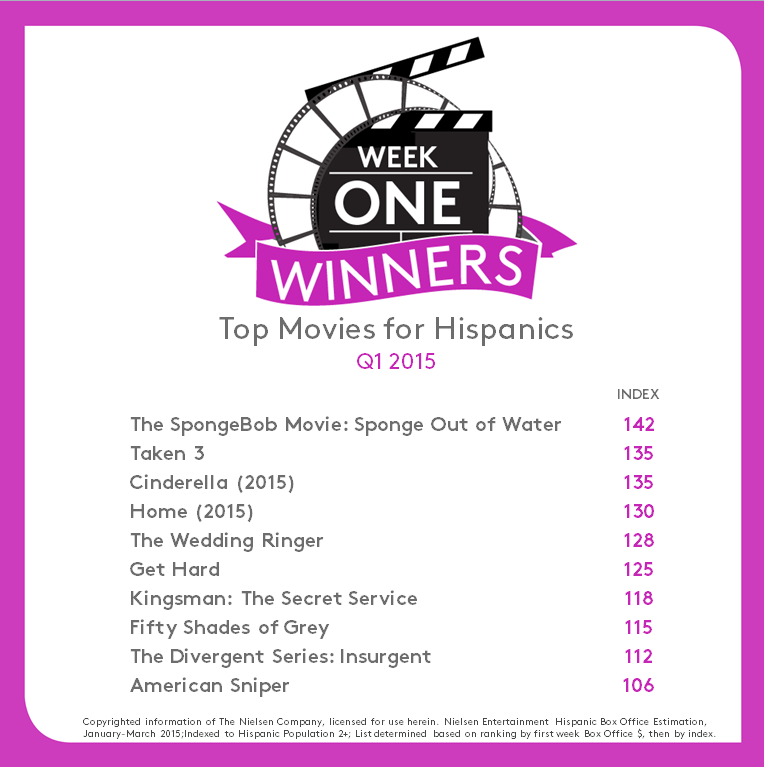 Hispanics can help “start off your films with a bang.”  That’s what Pete Filiaci, our VP Strategy and Insights, said about Hispanic opening weekend attendance during the recent Hispanic 411 movies webinar in partnership with Nielsen. And, as we step into the summer blockbuster season, it’s a good time to look at which titles Hispanics went to see in droves. Since opening weekend sets the pace for opening week, each quarter we report on the “Week One Winners.”  Using Nielsen’s Box Office Estimation tool we index Hispanic opening week box office contribution to the total Hispanic population 2+ (17% of the U.S.).

The Spongebob Movie: Sponge Out of Water ranked top of the list; its release ended American Sniper’s month long run at the top of the Box Office. Family titles Disney’s Cinderella and 20th Century Fox’s Home also made the list. All three titles invested in Spanish-language media, including custom executions in Univision’s hit show Nuestra Belleza Latina. Studios know that family films drive Hispanics to theatres, and, at Cinemacon, marketers agreed that attracting those moviegoers should be a core industry objective.

Stay tuned to see how the summer popcorn titles fare with 2Q 2015 “Week One Winners.”