Univision at the Producer’s Guild Awards

“I’m proud to say that of our 10 honorees, four are women, one is from Mexico and one is from the AARP [Clint Eastwood],” announced the Producer’s Guild Association’s (PGA) National Executive Director Vance Van Petten to kick off the PGA Awards Nominees Breakfast.

And what a year it’s been for Mexico’s born-and-bred “Birdman,” Alejandro González Iñarritu.  He won Producer of the Year that night, one of quite a few awards that he’s taken home so far.  As Flama reports, if he wins the Academy Award for Best Director, it’ll be the second year in a row that a Mexican takes home the statue (Alfonso Cuarón won last year for “Gravity”).

But it’s not just Latinos behind the camera that have hit the Hollywood limelight.  It’s in theater seats, too.  That’s why the PGA welcomed us to host its Awards cocktail party with a branded champagne bar.  The message was clear to 1400 industry influencers:  “Producers make movies happen. Hispanics are first in line to watch.”

According to the Nielsen Moviegoing Report, Hispanics are 27% more likely to hit theaters on opening weekend.  If a producer’s goal is a strong open, then Hispanic consumers are a must-market-to group. 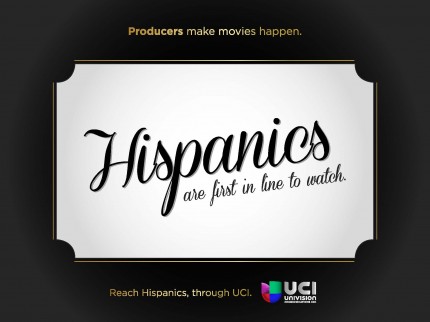