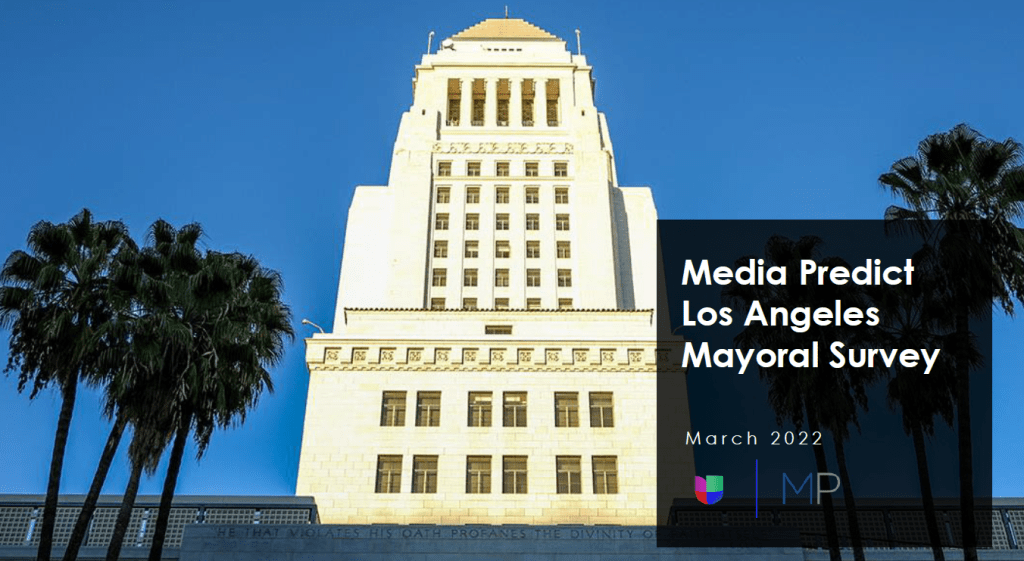 In June the voters of the City of Los Angeles will be asked to choose two candidates to proceed to the General election in November from a crowded field of Mayoral hopefuls.  As Los Angeles attempts to recover from the ravages of the pandemic, including a stark increase in violent crimes and unchecked proliferation of unhoused people in communities across the city, the next Mayor of Los Angeles will have a lot of work to do starting from day one.

In collaboration with our data partner Media Predict, Univision wanted to better understand the mindset of the voters choosing the next generation of leadership in the second-largest city in the United States. What issues do Latino voters and non-Latinos care most about?  What are attitudes toward the local government representation in the city today?  What are the most pressing challenges facing our neighborhoods?  What does Los Angeles need to do to get on the right track?

In an online survey of 691 registered voters, 18 years or older, we delved deeply into the hearts and minds of the electorate to better understand the key issues and their degree of importance as a motivation to vote in the upcoming citywide elections.

There’s no question that Los Angeles is facing significant challenges as it looks to emerge from the pandemic.  The city’s next leaders will have the monumental task of attempting to solve challenging problems.  Univision will continue to focus our coverage and insight-gathering on this important time in the city of Los Angeles and the potential impacts on our community.  We believe that representation matters and will work hard to give our viewers the most up-to-date and thought-provoking information about the upcoming elections in the ‘City of Angels’.  We hope you will continue to follow our ongoing coverage of the elections and the candidates as the races head toward the June Primary and November General elections.

Leading the Change 2021: How Connecting with U.S. Hispanics Can Grow Your Brand (Video)